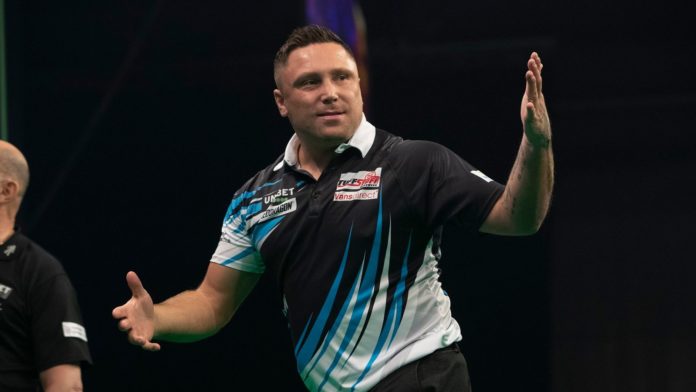 After a short break The Darts Show podcast team reconvene for a Premier League preview, with a bumper list of guests and a host of news to get stuck into.

Four guests join the team to make up for the absence of Michael Bridge, who will be with us in Milton Keynes, and Gerwyn Price is our feature interviewee ahead of a Premier League return like never before.

The tournament will take place in two stretches – with standalone Play-Offs in October still a hope but looking increasingly unlikely – and Price has his sights set on the top four.

Andy Goldstein is part of the presenting line-up and we hear from him on joining the team, while Chris Dobey and PDC stats guru Ochepedia are also along for the ride.

Here’s a taster of what to expect….

Gerwyn Price – away from the oche ‘The Iceman’ has been getting stuck into property development and greyhound racing, while there’s darts chat too with Price unsurprisingly no fan of no crowds!

Chris Dobey – a press day at St James’ Park and a walk-on to ‘Local Hero’ was quite the Premier League introduction for Dobey last year. He is back as a Challenger this year but it looks very different for Dobey who is just as determined to take his chance.

Lloydy’s Talking Points – and lots of it! World Series selection, the introduction of a Women’s Series later this year and a couple of players suspended amid match-fixing allegations, the team get stuck into the latest talking points.

Andy Goldstein – we interrupt the presenter during his afternoon run to gauge his excitement at joining the Sky Sports team for a few days in Milton Keynes and more importantly get his walk-on music and darts nickname.

Ochepedia – amid the growing trend of stats analysis in darts, ‘Oche’ picks out some key numbers ahead of the Premier League’s return and discusses how one or two players have started to show an interest in how they can use the data to improve their game.

Join us for the return of the Premier League on Tuesday August 25 for six consecutive nights of action, followed by four more from Thursday September 3. Stay up to date with reports, interviews, features & reports at skysports.com/darts, our app for mobile devices and @SkySportsDarts.