Home Sport Perez out, Vettel in? ‘I’m not making way!’ 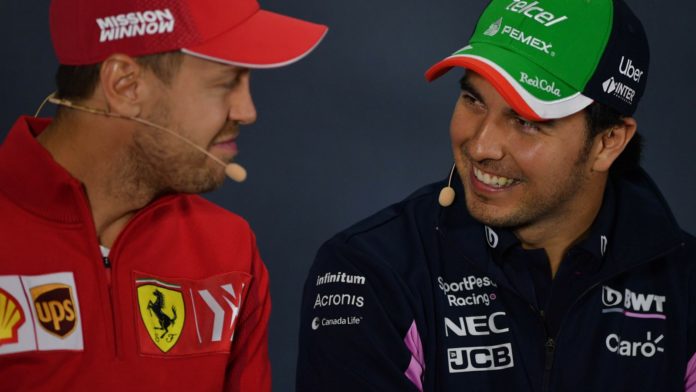 Perez speaks to Rachel Brookes about his Racing Point future

Sergio Perez has told Sky Sports that he is increasingly confident he will remain with the Racing Point team for the 2021 Formula 1 season despite persistent speculation about Sebastian Vettel replacing him.

Options for Vettel, the four-time champion who is leaving Ferrari at the end of the year, appear limited for 2021 but Racing Point, who will be rebranded as Aston Martin, have been heavily linked – and neither team nor driver, while insisting nothing has been agreed, have denied interest.

Perez and team-mate Lance Stroll are both under contract for next year, although Perez has previously admitted it is “obvious” he would be leaving if Vettel were to sign given Stroll’s father, Lawrence, owns the team.

But when speaking to Sky F1’s Rachel Brookes at the Spanish GP about the unlikelihood of Stroll ‘making way’, Perez said: “I’m not making way either! I hope not.”

The Mexican, who missed the two races prior to Spain after contracting coronavirus, then gave a positive outlook of his future.

“At the moment everything is looking as if we’re going to carry on with the team,” he stated. “So we’ll see.

“The feedback I’ve got from the team is we are going to carry on.”

Perez, who signed a three-year contract with the team last year, added over the weekend that he felt “quite secure” about his seat, and said of Vettel: “I believe it’s just a matter of time before those rumours can go away.”

Vettel reiterates that he’s in F1 to ‘win races’

Since his surprise Ferrari exit was confirmed in May, Vettel has made it clear that his preference is to remain in the sport which he dominated from 2010 to 2013 – although only with a competitive team.

Racing Point, albeit while courting criticism from rival teams, have enjoyed a big leap in performance in 2020 and are currently third in the standings.

Speaking to Sky in Germany last week, Vettel, who has admitted talking with Racing Point, said it “could still take a while” to sort his future.

“You don’t have to be a genius or a rumour expert to know that there are not so many free seats left,” explained Vettel.

“I’m here to race, to win races, and I think we all have ambitions. That’s still what drives me the most.

“What is most important to me is that I am fully convinced that it is a decent package.

“That means that it is a decent car, with which you can participate at the front. And [it has to be] a team that is willing to progress further, and of course have fun with.”