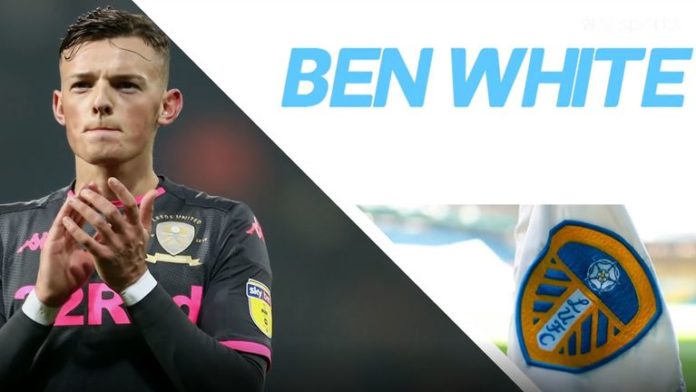 Leeds United have made a third bid for Brighton defender Ben White, believed to be £25m.

The newly-promoted Premier League side have already seen bids of £18.5m and £22m rejected for a centre-back who enjoyed a hugely successful loan spell at Elland Road last season.

As a result, the 22-year-old has been identified as Marcelo Bielsa’s number one target this summer with the player reportedly turning down a third improved contract offer from Brighton.

White’s current deal runs until 2022 with the option of a further 12 months and Brighton boss Graham Potter is keen to integrate him into the first team this season.

“He’s the one they want, he was outstanding last season and he shone in a Leeds team that did incredibly well.

“But there are other teams interested as well – Liverpool have been linked with him and he’s a Rolls Royce of a footballer. The talk at Leeds is if they get him and he plays every week in the Premier League next season, then he will be in Gareth Southgate’s England squad for the Euros – that’s how highly rated he is. Southgate has already picked him out as one to watch along with Kalvin Phillips, so he’s an outstanding player.

“He could probably slot into any squad in the Premier League, but at Leeds he’ll be guaranteed to play every week. Bielsa knows how to get the best out of him and he fixed the system at Leeds.

“An interesting point regarding White – I’ll rewind 12 months when Pontus Jansson left Leeds and I’d been told that White is the player Leeds want to replace him. There was a lot of talk of ‘who is Ben White?’, no one had heard of him at the time. But Bielsa was adamant that he was the player he wanted and that is one hell of a judgement call to get him in. He has been absolutely phenomenal.

“So they’ve had a couple of bids and we’re expecting another bid to come in. The player loved his times at Leeds, but I think he’s opened minded because he knows that potentially, there may be other offers.

“From a Brighton perspective, if bids are coming in, it’s a win-win situation for them as well, so it’s one to watch, but he’s definitely top of the list as far as Leeds are concerned and he’s the one player really that they would like to see slotting into the jigsaw this summer.”