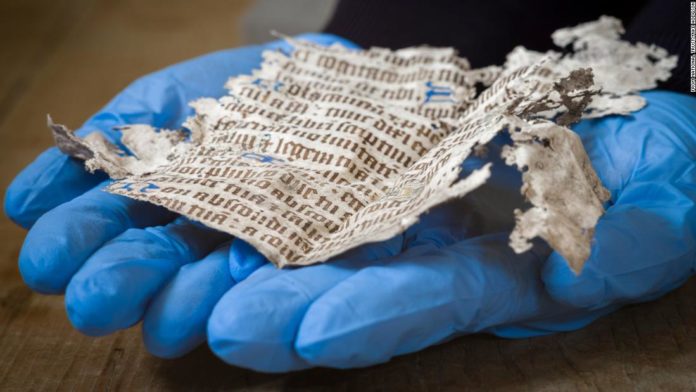 Written by Allen Kim, CNN
An archaeologist unexpectedly discovered medieval manuscripts, 16th-century clothing and Tudor books among the many artifacts left beneath the floorboards of Oxburgh Hall in Oxborough, England.

The most interesting find was a manuscript from the 15th century, which National Trust curator Anna Forrest believes was part of a portable prayer book that may have belonged to Sir Edmund Bedingfeld, the builder of Oxburgh Hall.

Oxburgh Hall is a moated house that belonged to the Bedingfeld family, and it is now a tourist attraction.

The discoveries were made during a restoration project after major structural problems were discovered on the roof in 2016. Due to the Covid-19 pandemic, archaeologist Matthew Champion worked mostly in isolation.

Curator, Anna Forrest, holds up one of the discoveries from under the floorboards Credit: From Mike Hodgson/National Trust

“We had hoped to learn more of the history of the house during the reroofing work and have commissioned paint analysis, wallpaper research, and building and historic graffiti recording,” Russell Clement, general manager at Oxburgh Hall, said. “But these finds are far beyond anything we expected to see.”

Building is ‘giving up its secrets’

Champion meticulously carried out a “fingertip search” through the debris, and he found a treasure trove of artifacts in two massive, ancient rat’s nests. One of the rat’s nests was filled with over 200 pieces of textile, fragments of early music, pieces from early printed pages and handwritten documents.

However, Champion credits the builders with discovering two of the most important finds: one being the 600-year-old manuscript, and the other a book called the King’s Psalms, dating back to 1568. The book was discovered mostly intact, and the only other known copy is in a British library, according to Champion.

“These objects contain so many clues which confirm the history of the house as the retreat of a devout Catholic family, who retained their faith across the centuries,” Clement said. “We will be telling the story of the family and these finds in the house, now we have reopened again following lockdown.

“This is a building which is giving up its secrets slowly. We don’t know what else we might come across — or what might remain hidden for future generations to reveal.”

Oxburgh Hall is currently undergoing a nearly $8 million restoration and repair program that was initiated in 2016 to repair the roof. All the remaining debris has been removed and bagged in order to be cataloged in the future.