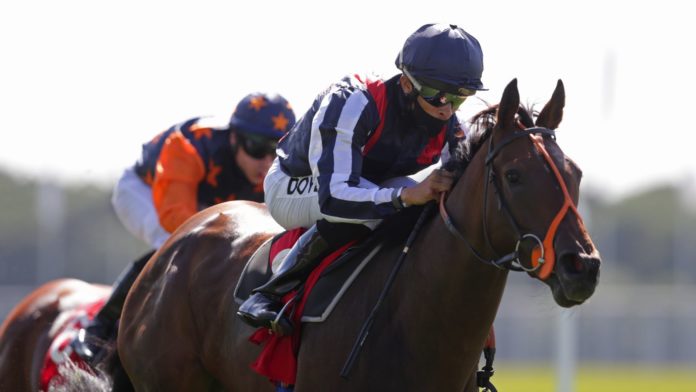 Happy Romance landed her owners another huge pot when holding off the late attention of favourite Devious Company in the Goffs UK Premier Yearling Stakes at York.

With the Weatherbys Super Sprint in the bag, connections of the Richard Hannon-trained winner were already in bonus territory, although she did have to prove her stamina stepping up to six furlongs for the first time.

The Dandy Man filly showed her blistering speed when quickening away from the field over a furlong out, with the dual Group Two-placed Devious Company – whose previous four outings had come at seven furlongs – caught flat-footed.

Devious Company eventually found his stride and began to gain ground, but Sean Levey had timed his decisive move just right on Happy Romance (4-1), who provided her first-time owners with another day in the sun in winning by a length and a quarter.

Hannon said: “I thought she answered a lot of questions there. She got the trip, I don’t think she loved the ground and struggled early on – I thought she was going to run horribly for a few strides, but in the end she got to the front with relative ease.

“She is a very good filly and I do think she’s more than just a flash-in-the-pan two-year-old. Physically she’s done very well and she will get seven furlongs.

“She’s progressively got better and better all year. It’s nice to win this race, which is worth a lot of money, not as much as it normally is but that’s the times we are in. We’re lucky that all these two-year-olds are here racing and the owners are having a ball.”

Considering future targets, Hannon added: “She’s in a sales race at Doncaster, but we’d love to get some black type if we could at some stage.

“We’ll be looking at the Cheveley Park and there are a couple of five-furlong Listed races. There’s also the Firth of Clyde (at Ayr) – a Group Three over six furlongs for fillies. That might be just the race for her to get a bit of black type.

“Next year I’ll bet we’ll see her in the Fred Darling at Newbury in April.”