Home Culture ‘The One and Only Ivan’ and ‘The Sleepover’ serve up stories for... 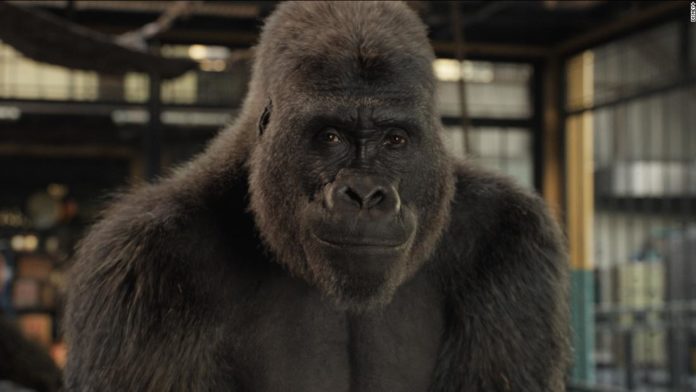 “Ivan” is, we’re told at the outset, inspired by a true story, but the anthropomorphic gorilla who narrates his own story while talking to a dog (Danny DeVito) and elephant (Angelina Jolie) makes clear that a few creative liberties have been taken.
Raised by people, Ivan (voiced by Sam Rockwell) lives in a shopping mall off Exit 8, where he’s the veteran headliner of the sort-of circus run by Mack (Bryan Cranston). Although Ivan says he loves his job, the circus is struggling financially, which prompts Mack to bring in a new potential star, a baby elephant named Ruby (Brooklynn Prince).
Jolie’s Stella, the old elephant, takes Ruby under her, er, trunk, but she knows she’s ailing and extracts a promise from Ivan: To ensure that Ruby doesn’t grow up in a cage, the way that they have.
What ensues — as directed by Thea Sharrock, from Mike White’s screenplay — is an unlikely adventure, one that brings to mind the recent live-action version of Disney’s “Dumbo,” with a similar message about the evils of animals being held in captivity.
The closing kick of “The One and Only Ivan” is somewhat stirring — and certainly works hard at being so — but it’s pretty tepid until then. That might be due, in part, to the difference in exploring an animal’s internal life on the page versus the computer-generated manipulation necessary to achieve that effect on screen.
Still, “Ivan” is on-brand for Disney, which has a long history of movies and nature documentaries designed to get young audiences to see the world from animals’ point of view.
Couched that way, this relatively spare exercise isn’t bad, but unlike its title character, it’s certainly not a headliner.`
“The Sleepover,” meanwhile, is derivative even by the undemanding standards of its genre, which is saying something — basically, serving up a twist on “True Lies,” with a touch of “Spy Kids” for good measure.
Teenage Clancy (Sadie Stanley, the star of Disney’s live-action “Kim Possible”) and her nerdy younger brother Kevin (Maxwell Simkins) are understandably shocked to discover that their mom, Margot (Malin Akerman), is an international thief, who entered suburbia by way of the witness-protection program.
The revelation comes as a shock, too, to their dad Ron (Ken Marino), especially when Margot gets recruited for one more job involving a jewel-encrusted crown, and reunited with her uncomfortably buff ex-boyfriend, Leo (Joe Manganiello).
With a couple of friends reluctantly in tow, the kids embark on an adventure to save their parents, deciphering a trail of clues mom left behind. But it’s all played so broadly — from Kevin’s crush on his sister’s pal to Ron’s jealousy and awkwardness — that the film simply lurches loudly from one mundane action scene to the next.
Netflix caters to all sorts of audiences, and something like this is very clearly aimed at appealing to a younger crowd, hopefully without prompting their parents to flee the room.
In theory, that’s a workable and welcome scheme. In practice, it’s an assignment that “The Sleepover” doesn’t pull off.
“The Sleepover” and “The One and Only Ivan” premiere Aug. 21 on Netflix and Disney+, respectively.