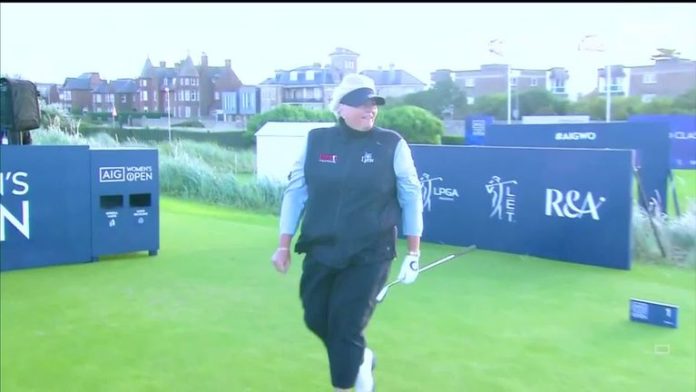 Davies won the Women’s Open in 1986 before the event was recognised as a major; 2020 contest being held at Royal Troon for first time

The 56-year-old has featured in every edition of the Women’s Open since making her debut as a 16-year-old amateur in 1980, with Davies winning the 1986 contest before any of the world’s current top 10 were event born.

Davies was handed a 6.30am start time alongside Ireland’s Olivia Mehaffey and Canada’s Alena Sharp, with tournament officials welcoming her as she made her way to the first tee.

“It was lovely,” Davies told Sky Sports. “I got the email last night and didn’t even think twice about it, obviously.

“Number one, it’s just nice to get out in front of the field but then I thought it was more of an honour than just thinking about that lovely early tee time.

Davies bogeyed the par-four first and double-bogeyed each of her next two holes before racking up a double-bogey seven at the par-five sixth, only to undo some of the damage with successive birdies from the eighth.

A bogey at the tenth and back-to-back double-bogeys from the 11th to Davies to 12 over for the day, with three birdies over the last six holes only enough to return a nine-over-80 in tough scoring conditions.

Watch the AIG Women’s Open throughout the week live on Sky Sports. Live coverage continues on Friday from 10.30am on Sky Sports Golf, Sky Sports Mix and the Sky Sports YouTube channel.