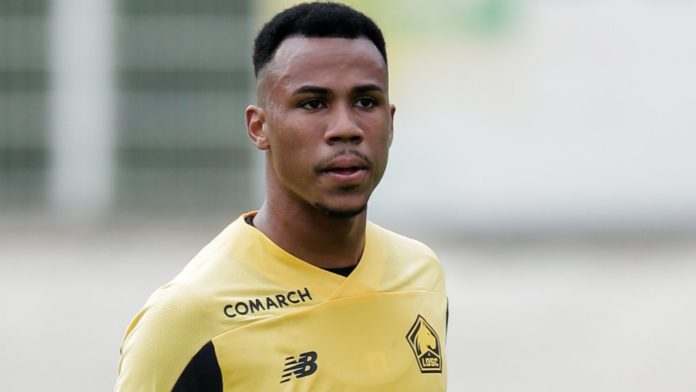 Arsenal remain clear favourites to sign Lille centre-back, who is also of interest to Paris Saint-Germain

Manchester United have held discussions with Gabriel’s representatives, in a late twist to his expected exit from Lille.

Arsenal remain clear favourites to win the race for the 22-year-old Brazilian ahead of Napoli, despite the Italian club making a late and improved offer to the player.

As Sky Sports News reported last month, Manchester United have been monitoring the situation. However, it is understood their interest in the player is unlikely to go any further.

Although in the market for a new centre-half, preferably on the left of a pair, and having worked towards two other targets, Manchester United have not made a bid or held discussions with Gabriel himself.

But it remains likely the player will come to the Premier League this summer in a deal worth £27m, whether that is London or Manchester.

Gabriel was a key member of the Lille side that finished fourth in Ligue 1 last season, also starting all of their Champions League games – and he undertook a medical with Everton ahead of the coronavirus lockdown.

And since, the Merseysiders involvement has diminished.

Arsenal have been keen to sign Gabriel to boost their centre-back options this summer, adding to the arrival of youngster William Saliba, who was signed from St Etienne for £27m last summer and loaned back.

In June, David Luiz signed a new one-year contract at Arsenal, while Pablo Mari and Cedric Soares have also made their loan moves permanent from Flamengo and Southampton respectively.

In addition to the deals for Mari and Soares, Arsenal have also signed Brazilian winger Willian. The 32-year-old signed a three-year deal with Arsenal following the expiration of his contract with Chelsea.

Who is Gabriel Magalhaes?

Gabriel started his career at Avai, a side who currently play in the second tier of Brazilian football.

After 21 appearances, he made the move to Europe in January 2017, signing for Ligue 1 side Lille for a fairly modest fee of £1.5m.

Gabriel initially struggled to adapt to senior football at Lille and went out on loan twice. First to Troyes, where he spent the first half of the 2017/18 season, before a temporary move to Dynamo Zagreb in January 2018.

First-team opportunities continued to evade him, moving between the reserve and senior sides before returning to Lille for the start of the 2018/19 season.

Gabriel took his time to cement himself in the side, not starting a Ligue 1 game until February 2019. But he has not looked back since; forging a relatively successful partnership with former Southampton player Jose Fonte at centre-back.

After a seven-year absence, Gabriel helped Lille qualify for the Champions League in 2018/19, finishing second in Ligue 1 to PSG.

Gabriel has continued his ascent this season, with a string of impressive performances both domestically and in the Champions League.

Lille president Gerard Lopez spoke to Sky Sports News about Gabriel’s move before it was formally agreed, and said the Brazilian is “at the start of something big” in his career.

“He is a great kid and that is one of the most important things,” Lopez said. “He didn’t have an easy start with us given the fact that the coach at the time didn’t trust him because of his age.

“He is a real fighter and has immense physical presence but knows how to use it smartly. He is still raw and I know the Brazil national team are looking at him very seriously for the A-team.

“I think he is at the start of something big, and he does everything to succeed.”

What else have Arsenal got planned?

Sky Sports News’ Dharmesh Sheth gives his insight on some of the other deals Arsenal have planned this summer:

Following the arrivals of Willian, Gabriel, Pablo Mari and Cedric Soares at the Emirates Stadium, it’s understood Dani Ceballos signing on loan for Arsenal again next season remains a possibility.

He is under contract at Real Madrid until 2023, and has featured in 56 games for the club since his arrival at the Bernabeu from Real Betis in 2017.

The player sent out a cryptic tweet of an hourglass emoji as the forward is close to ending speculation about his future with his current contract set to expire at the end of the season.