Home World Argentina grapples with Covid-19 and a grim future 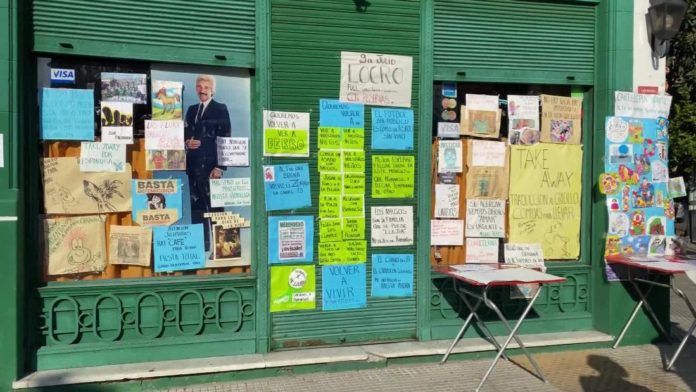 “El Viejo Buzón” (The Old Mailbox) had been a very popular café in downtown Buenos Aires and a hanging spot for generations of Argentinians, common folk and celebrities alike, since it was founded 37 years ago. It’s the kind of old-style, corner café that is never empty. That was the case until March 20 when the coronavirus pandemic hit Argentina and the country shut down.
“It’s an unusual situation because the blinds are closed and the tables empty when the main thing about a place like this is people,” Evangelista said.
A normally boisterous establishment, the Old Mailbox is now mostly quiet — hanging on, hoping against hope it can survive. When CNN visited, the only sound to be heard was a coffee machine for the meager takeout business operated by the only employee around, one of eight in total. Evangelista says he has managed to avoid layoffs thanks to a government credit program that’s set to expire on September 20.
For Santiago Olivera, it’s already too late. The restaurateur had to shut down three establishments — two bars, “Bad Toro” and “Sheldon,” and “Clara,” a cafeteria — in the upscale Palermo district of the capital, laying off more than 60 people.
“We started accumulating debt since March that resulted from paying salaries and rents without generating any revenue. I had to take loans from banks. We accumulated more debt month after month from taxes, utilities and rents,” Olivera told CNN.
They are among the hundreds of cafés, bars and restaurants in Buenos Aires that have been forced to close due to the coronavirus pandemic. Their demise is a troubling new chapter for Argentina’s battered economy, which was roiled by runaway inflation and stagnant growth even before Covid-19 slammed the door on businesses.

The pandemic has been brutal for small and medium-size businesses around the capital Buenos Aires. According to the Commerce and Industry Federation of the Autonomous City of Buenos Aires (FECOBA, by its Spanish acronym), 24,200 of those businesses, roughly 22% of the total, had permanently shut their doors by mid-July.
“The shutdowns didn’t stop even when the country started to reopen,” according to FECOBA’s president Fabián Castillo, referring to a brief reopening in Buenos Aires last month that was rolled back due to a spike in coronavirus infection rates.
Jonatan Loidi, a financial analyst, author and economics professor, says the pandemic and the implementation of a lockdown aggravated an economy that was already in a recession.
“Argentina hasn’t grown since 2011. In the last three years there has been not only lack of growth but also a fall in the country’s GDP, as well as other macroeconomic indicators that are clearly not ideal,” Loidi told CNN.
Loidi pointed out the annualized inflation rate in Argentina, even before the pandemic, was 55%.
“Uncertainty is the word that best describes life in Argentina nowadays,” Loidi said, adding that business owners and people must put up with five different exchange rates for things like paying for imports in dollars or making purchases online.
Argentina has had its share of financial collapses. Rioting and civil unrest broke out in December 2001 after then-finance minister Domingo Cavallo announced a freeze in bank deposits, a crisis that would result in the resignation of Cavallo himself as well as his boss, then-president Fernando de la Rúa. By Christmas, Adolfo Rodríguez Saá, De la Rúa’s successor, had been forced to resign after announcing that the country had defaulted on $93 billion of Argentina’s sovereign debt. The crisis left one out of every four workers unemployed and 55% of the population facing poverty.
Less than two decades later, Argentina faces another financial crisis that has been brewing for more than a year and already sparked protests last September and October due to its ongoing currency crisis, among other factors. The Argentine peso plunged by more than 35% against the US dollar in August 2019.
The US dollar currently sells in Argentina at well over 70 pesos, and the amount of dollars a regular Argentinian can buy is strictly limited.
The government of President Alberto Fernández reached a deal on August 4 with creditors who are owed $65 billion, roughly 20% of the nation’s crushing $323 billion total debt. The agreement gives some short-term relief by avoiding another default while retaining some access to foreign capital.
But Fernández says his priority is a venture involving the coronavirus vaccine being developed by AstraZeneca with the UK’s Oxford University that would be manufactured in Argentina and Mexico, which he hopes will put the country’s economy back on track.
Meantime, the President announced Friday that quarantine measures will remain in place across the country until the end of August.
Patience is running low.
About 25,000 Argentinians took to the streets of Buenos Aires on Monday to protest a judicial reform launched by Fernández aimed at adding more justices to the Supreme Court — which opponents say is a gambit to stack the court with allies — the economic crisis and the government’s handling of Covid-19. There were also similar protests in main cities such as Cordoba, Mar del Plata and Rosario.
Sitting at his desk at “The Old Mailbox” café, Felipe Evangelista fears developing a vaccine may take longer than the country’s economy can withstand.
“One of my main fears is that people won’t come back,” he said.
He says he wonders whether life will change so much that people will never return to the little corner café that has been a gathering spot for generations of Argentinians… but hope is the last to die.
“We hope that when this [pandemic] turns around, people will come back, fill the tables and sing again. We hope they will be willing to dance a tango again and return to what we once were.”