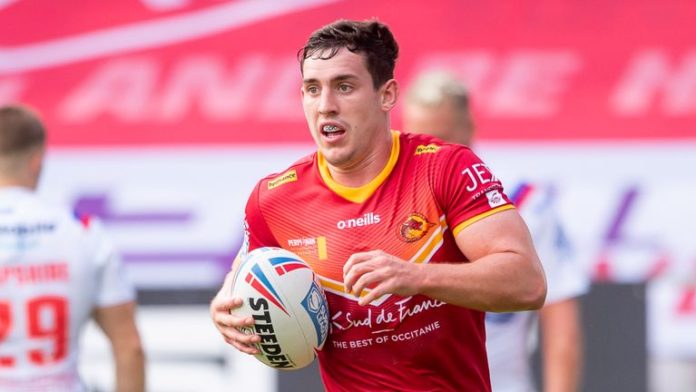 We take a look at all of the big issues and team news as Wakefield Trinity and Catalans Dragons go head-to-head for a Challenge Cup quarter-final place on Saturday afternoon at 2.30pm…

New look for the Challenge Cup

Rugby league’s premiere knock-out competition is shaping up differently to where it was pre-lockdown, with Toronto Wolfpack – who beat Huddersfield Giants 18-0 in Round 5 – and the remaining Championship and League One clubs having withdrawn from the Cup.

That necessitated a redraw involving the remaining 10 Super League teams, with six drawn straight into the quarter-finals. That left Wakefield and Catalans, and Castleford Tigers and Hull FC to play each other in Round 6.

Saturday was due to see a double-header behind closed doors at Huddersfield’s John Smith’s Stadium, although the positive coronavirus tests at Hull FC last week means their tie with Castleford has been postponed with a date for that match to be confirmed.

Instead, it is left to Wakefield and Catalans to battle it out for a place in the last eight at the weekend, with the winners set to face Salford Red Devils on the weekend of September 19 and 20.

Trinity have not reached the final of the Challenge Cup since 1979, when they lost 12-3 to Widnes, but they did reach the semi-finals as recently as 2016 and head coach Chris Chester guided Hull Kingston Rovers to Wembley for the final in 2015, only to lose to Leeds Rhinos.

Catalans, meanwhile, are aiming to repeat their historic triumph from two years ago which saw them become the first overseas side to lift the trophy.

This will be the first time Trinity and the Dragons have met in the Challenge Cup, although it is only one week since they faced off in Super League in a match which saw the French side run out 58-0 winners on the back of hat-tricks from Tom Davies and Matt Whitley.

That clash at Totally Wicked Stadium saw a change of opponent for both teams, with Catalans having originally been due to play Salford Red Devils prior to their squad being forced to self-isolate following the positive tests for previous opponents Hull FC.

Wakefield, meanwhile, had been preparing to face defending champions St Helens on the Sunday, but the rejigged fixture list meant they would instead face the Dragons in a re-arranged game from earlier in the season and a day earlier than they had been expecting to play.

“First and foremost, we are going to get an opportunity to prepare for the right team,” Trinity head coach Chester, who expects a much better showing from his team in the Cup clash against Steve McNamara’s men.

“Obviously, we were the only team last week hampered by the changed fixtures. We were due to play Sunday, so it didn’t give us a great deal of time to prepare.

“The biggest lesson I learnt is that we are a better team when we try and move teams around. We changed the plan to try and challenge Catalans middles and it backfired on us. In that respect I will take the responsibility.

“But there were some individuals out there, and senior guys as well, that were way below any standards of a Wakefield Trinity player.”

Catalans head coach Steve McNamara has been given a boost ahead of Saturday’s Challenge Cup tie with the news Israel Folau will be available again after missing the previous week’s win over Wakefield.

The Australian three-quarter was absent last Saturday due to being with his wife following the birth of their child, having produced a man-of-the-match display in the Dragons’ victory over Trinity’s local rivals Castleford in their previous Super League encounter.

David Mead and Samisoni Langi both produced fine displays in the centre in Folau’s absence last week, although McNamara confirmed Folau will be involved again to add to his options there.

“We were close to bringing him and playing him, but it was a really important time for his wife and his newborn – particularly when there are no other family members around,” McNamara said.

“We had a really good replacement in David Mead, who came in and played really well again with his quality, and Izzy managed to do the right thing, look after his family first and he’ll be back again.”

However, Catalans will be without Sam Tomkins once again after he was handed a one-match suspension for tripping – just one week after returning to the side following a two-match ban which kept him out of the Dragons’ first two matches of Super League’s return.

Sam Moa is missing too after being given a two-match suspension for a high tackle, while Langi and Julian Bousquet are unavailable due to injury.

Senior signs on for Wakefield

Trinity boss Chester has a selection dilemma in the backs ahead of the Cup tie against Catalans, with Tom Johnstone and Lee Kershaw injured, and Reece Lyne being handed a two-match suspension for dangerous contact.

However, he has been able to bring in Huddersfield three-quarter Innes Senior on loan for one month and the 20-year-old is in line to make his debut in the clash with the Dragons.

Senior, who stands at 6ft 4in tall, has scored eight tries in 25 Super League appearances for the Giants, but has not featured for them in the competition since August last year and is looking forward to getting out on the field again.

“I’m happy for the opportunity to get some game time and play with new and experienced players,” Senior said.

“I’d like to thank Huddersfield for allowing me to go on loan and Wakefield for showing interest in me and working to get the deal done. I’m excited to continue my development.”

Chester could well give an opportunity some of the younger members of his team as well, with former London Broncos player Alex Walker named in the 21-man squad, plus winger Jack Croft and back row Connor Bailey.

“That is the good thing about having young kids in your squad,” Chester said. “Alex Walker is still young, we have got Jack Croft, Connor Bailey and Yusuf Aydin that are all chomping at the bit.”