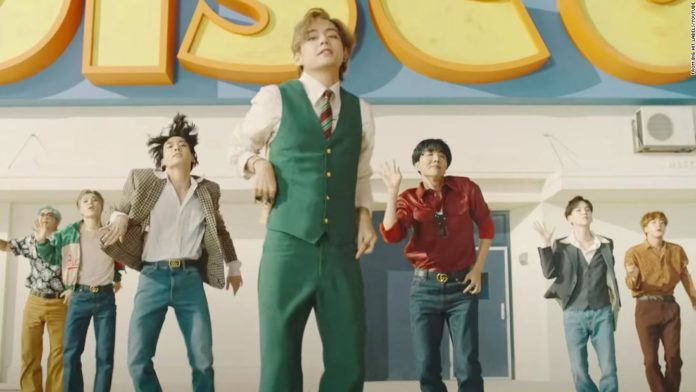 “Dynamite” is clearly already a hit for the world’s biggest K-pop group.
The disco pop tune comes six months after their fourth studio album, “Map of the Soul : 7,” was released.
According to a press release, “BTS sings of joy and confidence, treasuring the little things in life that make life truly valuable and special” in the single.
“The song aims to bring a new surge of much-needed ‘energy’ to reinvigorate the global community in the midst of Covid-19,” the release states. “Creative contributors to “Dynamite” include David Stewart and Jessica Agombar, known for “What A Man Gotta Do” by the Jonas Brothers and “I Love You’s” by Hailee Steinfeld.”
Several K-pop stars work with American producers and songwriters, but “Dynamite” marks the first single sung completely in English from BTS.
The song’s music video keeps things light with colorful and bright scenes featuring the seven members with retro concept props, hairstyles and attire.
Earlier this month BTS announced that – contingent on theaters reopening – their film “Break the Silence: The Movie” will roll out to theaters in more than 70 countries beginning September 10.
More countries, including the United States, will debut the film in theaters starting September 24, according to the site.
BTS is set to sing “Dynamite” at a premiere performance during the 2020 MTV Video Music Awards on August 30.