Home Sport Graves: Why The Hundred is needed 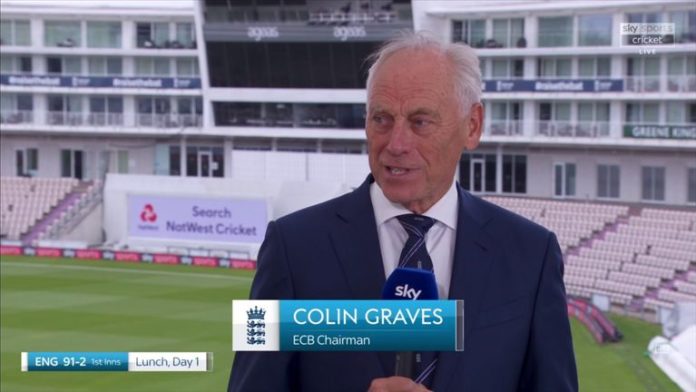 Outgoing ECB chairman: “I think it is the right thing to be doing and will be a valuable asset to the ECB going forward, both from a profit perspective and playing point of view”

Outgoing ECB chairman Colin Graves believes The Hundred will boost English cricket financially and from a playing perspective and that some of the critics are being won around.

The new 100-ball tournament will begin in 2021, a year later than originally planned, due to the impact of the coronavirus pandemic.

Graves says getting the competition up and running was the “biggest challenge” of his five-year tenure but necessary in order to broaden cricket’s appeal.

“I think the biggest challenge was getting The Hundred off the ground. We had all the pushback initially but I think people are now starting to see the advantages of it,” he told Sky Sports.

“I think it is the right thing to be doing and will be a valuable asset to the ECB going forward, both from a profit perspective and playing point of view.

“I think people, certainly in cricket, don’t like change. I don’t think they realised we are trying to attract a new audience – women, children and families, which we never really had coming to cricket.

“People are now starting to see the excitement of a new competition and that we are attracting a new audience. Starting to see it all coming together now and children getting really excited.

“I know that other countries, India in particular, are looking at The Hundred. It has created a lot of excitement around the world and people waiting to see what happens.”

The ECB signed a £1.2billion broadcast deal with Sky Sports and the BBC in 2017, which runs between 2020 and 2024 and includes live cricket returning to the BBC for the first time in 21 years.

“The broadcasting deal as a whole brought us a fairly large amount of money for the new competition, approaching 170 million over the five years from the broadcasters,” said Graves.

“It brought another broadcaster to the table and to get back on terrestrial television at that level will help expose cricket even more, which is what we want.

“The disappointment for me was to not see The Hundred take off in my last year as chairman, but it was the right decision – there was no point in doing it this year [due to Covid-19].”

“We had a number of competitions over the years that everybody seemed happy with and so they looked at another competition and thought ‘why do we need it’. But when we took it to the vote it went through 38-3, so it was fairly unanimous.”

Graves also says women’s and recreational cricket became priorities under his tenure as chairman and has urged his replacement, Ian Watmore, and the rest of the ECB hierarchy, to ensure that remains the case despite inevitable cost-cutting as a response to the coronavirus pandemic.

England Women won the 50-over World Cup during Graves’ stint as chairman, in 2017, while there will also be a Women’s Hundred from next summer with that tournament having succeeded the Kia Super League.

“The first board meeting I chaired, Clare Connor [now ECB director of women’s cricket] presented a new competition she wanted to put together.

“Look at where cricket has come in those five years – it’s phenomenal. It has moved very fast professionally and it needed to. It still has a long way to go and the ECB needs to keep investing because it’s a part of growth.

“When I took over, the recreational game wasn’t really talked about – it was a bit on the agenda that took five or 10 minutes and that was it.

“If I leave a message when I go it’s make sure the investment in the game is right across the game. Grassroots, girls, women, schools because that is what we need to grow the game. They are going to have to cut back, but cut back across not one part.”

On his tenure as a whole, Graves said: “I am amazed how much we have done in five years. One of the biggest reasons is that we changed executive in my first year as chairman and now have a fantastic executive led by [CEO] Tom Harrison.

“We have brought younger people in, professional people in, people in from outside the game with a strong commercial background. That new executive has helped to drive the game. Andrew Strauss was also brilliant as head of cricket.”

Finally, on getting cricket restarted behind closed doors amid the pandemic, Graves added: “When Covid first happened, we all thought the world was coming to an end but it comes back to Tom Harrison, his team, and our board.

“It was a massive challenge, because nobody had ever done it before. The determination of everyone, and the relationship we’ve got with countries like West Indies, Pakistan, Australia and Ireland has meant that they’ve come in this environment.

“It has been challenging for everyone but we’ve got live international cricket back up and running. I was looking at the broadcasting figures, they’re tremendous and it shows that we’re in a superb place to take cricket even further forward when crowds return.”