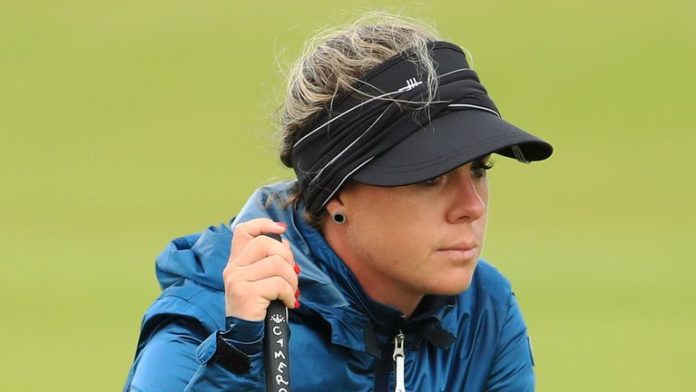 Daniela Holmqvist holds a narrow lead at the halfway stage of the AIG Women’s Open, with Minjee Lee and former world No 1 Lydia Ko in the chasing pack.

The Swede is the only player in red figures after rain and strong winds made for tough scoring conditions at Royal Troon, with Holmqvist following an opening-round 71 with a one-under 70 to head into the weekend with a one-shot advantage.

Austin Ernst and Germany’s Sophia Popov are a shot back in a share of second, with Lee and Ko in the group of five players on one over after rounds of 69 and 71 respectively.

“It definitely has been a strange year,” Holmqvist said. “I’m coming off an injury and still injured, so for me this break has been kind of good to just be able to focus more, rehab and kind of just heal and get a little bit stronger so I can be out here to perform again.”

Holmqvist took advantage of the par-five fourth and sixth but posted back-to-back bogeys from the eighth to turn in 36, before following successive gains from the 13th by dropping a shot at the par-four 15th.

Lee finished with back-to-back birdies to get to one over for the tournament alongside Ko, Jasmine Suwannapura, Emily Kristine Pedersen and American Lindsey Weaver, who was using a malfunctioning trolley to pull her own clubs around the course.

World No 4 Nelly Korda is tied-ninth and three back with Japan’s Haru Nomura, while seven-time major champion Inbee Park moved within five of the lead after a joint-low round-of-the-day 69.

Overnight leader Amy Olson slumped from four under to six over following an 81 but still made the halfway cut, while Solheim Cup captain Catriona Matthew is five over after adding a 76 to her opening 71.

Wales’ Becky Morgan is alongside Matthew on five over par, with Jodi Ewart Shadoff a further stroke adrift and 2018 winner Georgia Hall two shots further back following a five-over 76.

Bronte Law bounced back from an opening-round 80 to post a one-under 70 and get into the group on eight over that includes world No 2 Danielle Kang, the highest-ranked player in the field, while defending champion Hinako Shibuno missed the cut after rounds of 76 and 78.

Lexi Thompson ended the week on 11 over and also suffered an early exit, with the R&A releasing a statement to clear her of a potential rules infringement from the previous day.

Watch the AIG Women’s Open throughout the weekend live on Sky Sports. Live coverage continues on Saturday from 2pm on Sky Sports Golf and the Sky Sports YouTube channel.