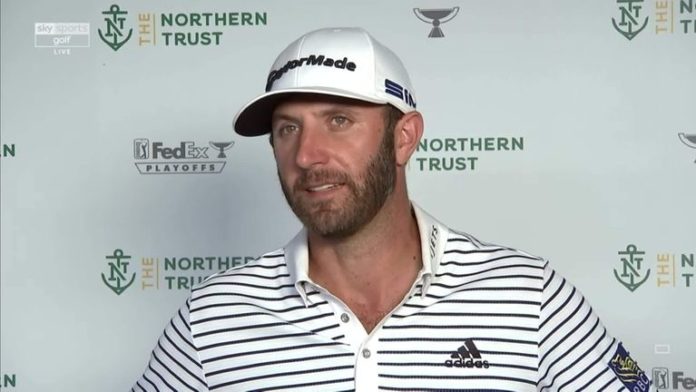 Johnson: “You start thinking about it [59] but I was trying to play one shot at a time. I was hitting it good”

Dustin Johnson refused to get downbeat about missing out on a history-making total after moving top of the leaderboard at The Northern Trust.

Johnson made two eagles and seven birdies over his first 11 holes at TPC Boston to take him to 11 under for his round, putting Jim Furyk’s 58 at the 2016 Travelers Championship – the lowest score in PGA Tour history – under threat.

The former world No 1 need just one birdie over the closing seven holes to post the second sub-60 score for the day and two birdies to equal Furyk’s score, but finished with seven straight pars to post a bogey-free 60.

“Any time you shoot a number like that, you’re never going to be disappointed,” Johnson said. “I definitely feel like the game is in good form and need to come out tomorrow and do the same thing.

“Everything was going well today. I was striking it really well, just giving myself really good looks and obviously I was rolling the putter nicely. Any time you are that many under through 11 holes you are putting well. I made some nice putts, but also I hit some really good shots.

“You start thinking about it [59] but I was trying to play one shot at a time. I was hitting it good. I knew if I could get on the greens and give myself some good looks, I could definitely have a chance.

“Obviously 18, if I had to do over again then I would have probably hit 3-wood, but it is what it is. I was trying to get a short iron in my hand. Unfortunately if it had been flat in the rough, I could have knocked it on, but ball was below my feet and had a tough shot, but gave myself chances.”

Johnson heads into the weekend on 15 under and with a two-shot advantage over Cameron Davis – who carded a second-round 64 – and Scottie Scheffler, who jumped up the leaderboard after carding only the 12th score of 59 or better in PGA Tour history.

Scheffler reached the turn in 30 and started his back nine with successive birdies, before following three straight gains from the 14th by getting down in two from 80 feet to post a closing birdie.

“Today was obviously a good day on the course,” Scheffler said. “I got off to a really good start and made a bunch of birdies on the front nine.

“Had some key up-and-downs at the beginning of the round that kind of got me rolling, freed me up a little bit, then the momentum just kind of kept going. Never really lost momentum, which was nice.

“A lot of times when you’re playing well you can lose that momentum towards the end of the round or have a hiccup here or there. The momentum stayed the whole time and I made a lot of putts.”