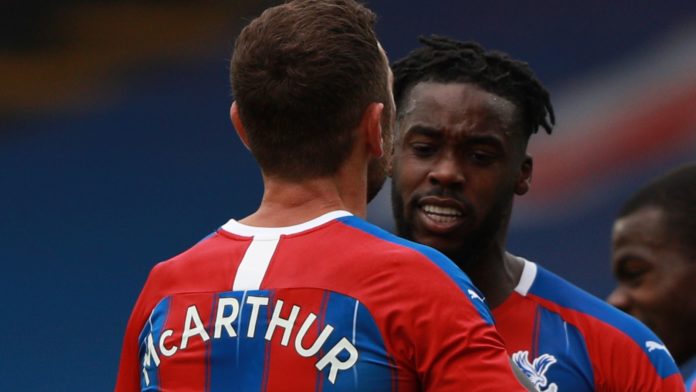 Crystal Palace boss Roy Hodgson has been handed a boost ahead of the new season after four players signed contract extensions.

Ghana international Schlupp has played 97 times fort Palace since joining from Leicester in 2017 and is pleased to have the opportunity to add to that tally.

“Last season was a difficult one at times due to injuries,” he told the club’s website.

“However, I’m delighted to have finished it off with a goal against Spurs, feeling 100% and extending my time with the club.

“I’m already looking forward to hitting the ground running in a few weeks’ time when the season restarts.”

Midfielder McArthur will be embarking on his seventh campaign with the club having been a regular in the side since joining from Wigan.

“When I arrived here in 2014, I didn’t consider the fact that, six years later, I would be making my 200th appearance for the club as I did against Bournemouth last season,” the Scotland international said.

“I’m proud of what the club has achieved during my time and I’m delighted to be carrying on here.”

Kelly, who has played 145 times for the Eagles since his move from Liverpool, said: “Having lived here for six years, my family are settled in south London and I’m extremely happy at Palace; it’s a close-knit club.

“I’m proud to have played my part in us establishing eight consecutive seasons in the Premier League, and I’m looking forward to seeing what this squad can achieve this coming season.”

Meanwhile, goalkeeper Henderson, signed from Nottingham Forest in the summer of 2019, is also keen to play his part.

Henderson said: “I’ve really enjoyed working with Dean [Kiely], plus Wayne [Hennessey] and Vicente [Guaita], too; it’s a great group to be part of.

“I’m delighted to continue my time with Palace, and I’m ready to contribute should I be called upon.”

Crystal Palace will begin the 2020/21 season with a home game against Southampton on September 12.

Click here for details of all their fixtures for the coming campaign.

The key dates of the Premier League 2020/21 season

The season is scheduled to finish on Sunday May 23, 2021 – just 19 days before the rescheduled Euro 2020 tournament kicks off.

The transfer window opened on Monday July 27 and will close on Monday October 5 at 11pm. An additional domestic-only window will run from October 5 to 5pm on October 16 but Premier League clubs will only be able to trade with EFL clubs.