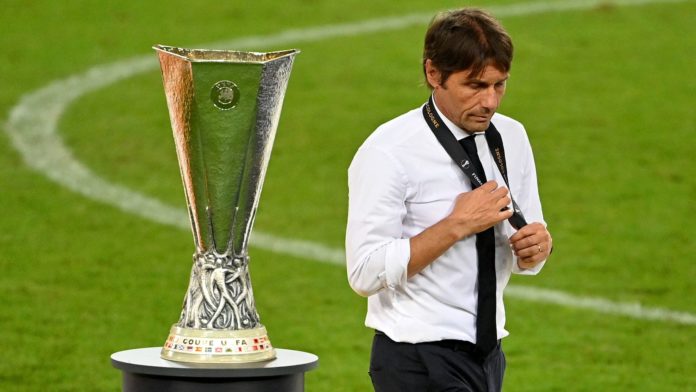 Antonio Conte has confirmed he will hold talks over his future but insists he will not turn his back on Inter Milan after their Europa League final defeat to Sevilla.

Inter let an early lead slip in a dramatic finale in Cologne as a 3-2 defeat saw Sevilla win the competition for a record-extending sixth time.

The agonising failure at the final hurdle means Inter’s trophy drought will stretch into a 10th season, but whether Conte will be at the helm to end that run next term remains in doubt after disagreements with the club’s hierarchy.

“We’re going to meet next week with the club and we’ll decide about my future,” Conte told reporters after the final.

“I’m not sure that I’ll be the Inter manager next season, we’ll decide together. Inter will plan the future with or without me.

“There is no rancour, from me nor the club. There are people I already worked with, so that’s not the issue. It’s about points of view, some situations that I faced this year and didn’t like, with all due respect for everyone.

“We’ll clarify the situation, without rancour, because I will always be grateful for having the chance to spend a great year at Inter.

“On the one hand it was also very tough, but if you think I will step back, I won’t. We’ll take a few days off and then meet [with the president] with cool heads.”

By contrast, the jubilant scenes of the Sevilla celebrations surrounded an emotional Julen Lopetegui, who earned the first trophy of his tumultuous managerial career.

“You have to know how to cope with difficult moments and overcome them,” Lopetegui said. “This is a feeling of immense happiness.

“I’m so grateful to our players for how hard they worked. Our anthem says we never give up and tonight we proved that again.”

“This is a magnificent club. I hope all the fans can celebrate it but with caution. This squad are great. They believe in it, what they work on and what they transmit.

“Even if we hadn’t won, I’d still love these guys, but today we take home the prize. We always believed.”