Home Sport Brumbies back on top with Waratahs rout 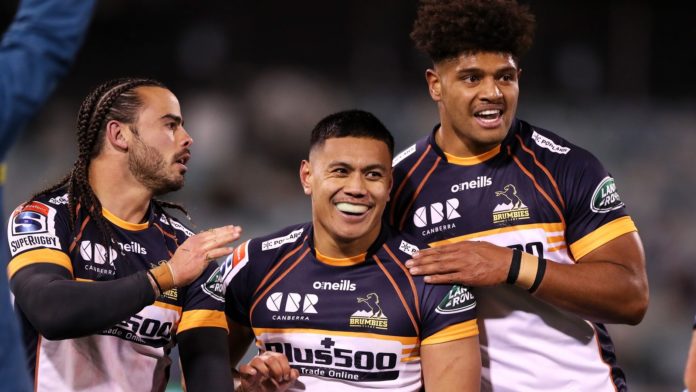 The Brumbies ran in six tries to storm back to the top of the Super Rugby AU standings with an emphatic 38-11 bonus-point victory over the Waratahs in Canberra on Saturday.

Winger Tom Wright and No 8 Pete Samu scored two tries apiece in the second half, while Andy Muirhead and Ryan Lonergan crossed in the first as the two-time Super Rugby champions got back to winning ways after a loss to the Rebels.

The 16 changes coach Dan McKellar made to his match-day squad had the desired effect and a fifth win in six matches gave the Brumbies a two-point advantage over the Reds with two rounds remaining before the play-offs.

The Waratahs kept the contest close in the first half and drew to within a point to make it 12-11 at the break after Jack Dempsey scored a try off the back of a tackle-busting run from Tom Horton.

The visitors had some success in nullifying the home side’s trademark rolling maul, but were unable to contain the Brumbies on the outside with five of the tries they conceded being scored in the corners.

The Waratahs had their share of misfortune as well with scrum-half Lonergan seemingly offside when he scored from Bayley Kuenzle’s through kick in the 15th minute, only for the TMO to allow the try to stand after reviewing the video replay.

The visitors would have needed more than that decision being reversed to secure a third successive victory, however, and will probably need to beat the Rebels next week in their final match of the regular season to stand a chance of making the play-offs.