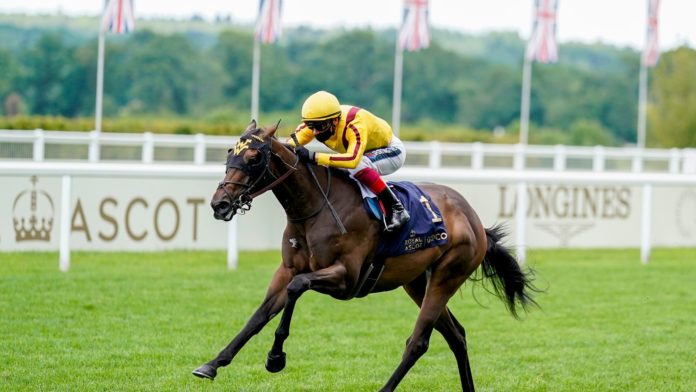 Campanelle will try to emulate Lady Aurelia by supplementing Queen Mary glory with victory in the Darley Prix Morny at Deauville.

Campanelle will try to make it three for Ward on Sunday, with jockey Frankie Dettori circumventing Covid-19 quarantine restrictions by having stayed in France since riding a big-race double at Deauville last weekend – a decision that has delighted the trainer.

“I hope she’s got a good chance, hopefully the ground won’t be too soft.

“It’s great Frankie has stayed in France for the week so he can ride. He must fancy her chances, I guess, and it’s always good to have Frankie in your corner.”

Tactical also struck gold at Royal Ascot in the Listed Windsor Castle Stakes and has since triumphed in fine style in the Group Two July Stakes at Newmarket.

Trained by Andrew Balding for the Queen, Tactical’s sights have been set on the Morny since his victory at Headquarters – and he will be partnered by Pierre-Charles Boudot in Normandy.

Her Majesty’s racing manager John Warren said: “Tactical left Kingsclere on Friday morning, with Andrew reporting that he couldn’t be happier with the horse.

“He has been aimed at this Group One since winning the July Stakes, and up to this point everything is going to plan.

“We are very hopeful he remains on target to give the Queen great pleasure with this cracking homebred.”

Nando Parrado was another to triumph at Royal Ascot, shocking his rivals as a 150-1 chance in the Coventry Stakes.

He has not raced since that victory in June, with trainer Clive Cox skipping a planned run at Chantilly last month when he was not completely satisfied with the Kodiac colt.

Nando Parrado is reportedly on top form now, though, with the possibility of easy ground not causing alarm.

Cox said: “I’m very pleased with him. Obviously his Coventry success was very pleasing, and we’ve had a nice healthy time in between.

“We had an entry in the Papin. He wasn’t quite right for that, and I’m pleased he’s in very good order and he’s heading over to France on Sunday.

“He won’t mind getting his toe in.”

Rhythm Master will be taking a huge leap in class as he tackles Group One company on just his second start for trainer Richard Fahey and owner John Dance.

The Dark Angel colt won a Haydock novice last month and follows in the footsteps of Dance’s multiple Group One winner Laurens, who won first time out before pitching up in Group Three company in France.

The owner told Sky Sports Racing: “We’ve only ever really done this with Laurens – who went from novice to Group company also at Deauville – so to be doing this again and going two rungs higher, it feels very exciting but also incredibly scary at the same time.

“We were looking at the races we were in and we just felt this was an opportunity. Richard obviously really likes the horse and felt that we should shoot for the stars.

“We were in both the Acomb and Gimcrack at York this week – we only entered the Prix Morny almost as a back-up in case the ground at York went really quick, but obviously it’s not quick anywhere at the moment.”

Channon said: “He knows how to win, which is always a good thing. He’s always been a good horse, but it is a good race.

Home hopes rest with Livachope, who is unbeaten in three for Jane Soubagne, Farfar, Acapulco Gold and Winvalchope.

On a card packed with Group-race action, the Darley Prix Jean Romanet is a second top-level contest – with Dettori on board Nazeef for John Gosden, as they bid to win the race for a second successive year after Coronet’s triumph 12 months ago.

Gosden’s son and assistant Thady has no qualms about Nazeef staying the trip, after she followed her sequence of six consecutive victories by finishing third in the Group One Qatar Nassau Stakes when stepped up to 10 furlongs for the first time.

Stamina did not appear to be a problem at Goodwood as she ran on late into a place.

Gosden said: “She’s in good form. She obviously ran very well (to win the Tattersalls Falmouth Stakes) at Newmarket and then stepped up in trip at Goodwood, where she ran well (again).

“This looks the obvious race – 10 furlongs for older fillies. I’d say you can be fairly confident that she stays 10 furlongs.”

Nazeef is the likely favourite in a field of 12, including Joseph O’Brien’s Leopardstown Listed winner Bolleville.