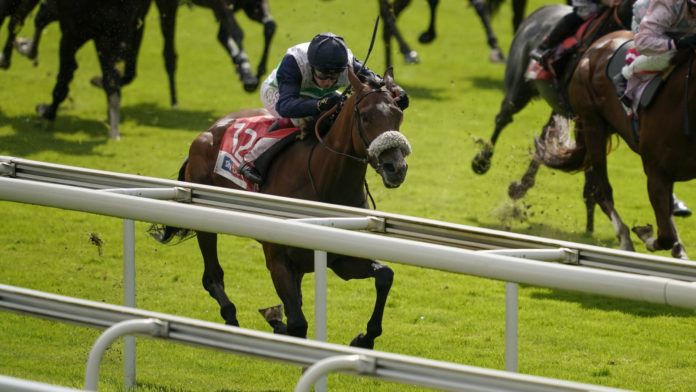 Coltrane completed his hat-trick with a dominant display in the Sky Bet Melrose Handicap at York.

Andrew Balding’s three-year-old did not make his debut until late June, but has made rapid progress in the space of a couple of months, with two sound efforts in defeat followed by back-to-back victories at Chepstow and Newmarket.

Facing a step up in class on the Knavesmire, Coltrane was sent off at 12-1 in the hands of champion jockey Oisin Murphy and moved smoothly into contention before pulling four lengths clear of Arthurian Fable.

“He had shown some nice work at home earlier in the year. He took a while to get his act together, but he won well at Chepstow and again on fast ground at Newmarket,” said Murphy.

“Being a typical Mastercraftsman, he relished a bit of dig in the ground today. On paper there were lots of horses who could improve, but this fella clearly stepped up.”

Asked whether the fast-improving colt could be a St Leger candidate, the rider added: “It didn’t even dawn on me. Let’s see what the owners think – Dashing Willoughby ran very well for them in a Leger. Whether that’s a step too far, I’m not sure.

“I think today was the target because it’s usually a valuable race and there’s plenty of history attached to it.

“I’m not sure what Andrew wants to do that. I think he would stay the Cesarewitch trip, but at his age it’s a long way to go (two and a quarter miles) and it also depends what the handicapper does.”