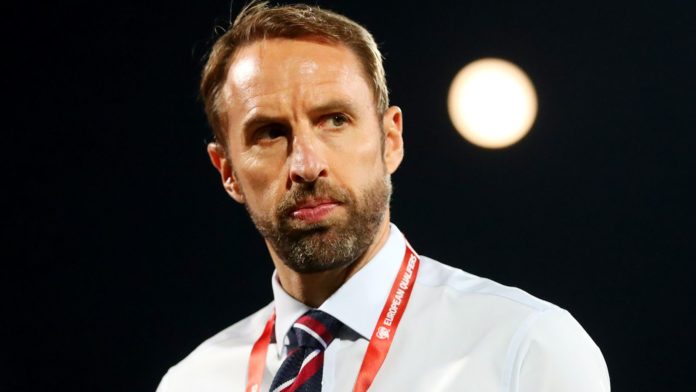 The England manager is being kept informed of developments with Harry Maguire, and the legal proceedings taking place in Mykonos. It remains to be seen whether Southgate will include Maguire in his plans, after the United captain pleaded not guilty to charges after appearing in court following his arrest on the Greek island.

The defender, 27, was arrested following an alleged fight on Thursday night, along with two other Britons, aged 28 and 29.

Southgate has always expected the highest standards of behaviour from his squad, and the stature of a player has been no barrier to them being dropped. Raheem Sterling’s omission from the starting eleven to play Montenegro last November, following his spat with teammate Joe Gomez, is a case in point.

With or without Maguire – Southgate is expected to name a lean squad of up to 25 players – not the bigger, more experimental squads he has employed in the past, which helped give some younger players experience of training with the elite.

Instead, it will be a tight squad packed with England’s very best talent – irrespective of their recent workload.

City and United’s seasons ran later than any other English clubs, because of their involvement in the latter stages of European competition. City were beaten by Lyon on Saturday August 15, while United lost to Sevilla a day later.

It means that United’s English players – if selected by Southgate – will have had just 13 days’ rest by the time they join up at St George’s Park on Sunday August 30, and City’s players 14 days off.

But Southgate will make no apology for naming those players in his squad when it is announced this Tuesday – and he can point to other countries by way of example.

Spain have called up David de Gea, Eric Garcia, Rodri and Ferran Torres from the two Manchester giants; Croatia have named Ivan Perisic for their squad – even though his Bayern Munich side made the Champions League final on Sunday night.

It would be surprising were the England manager to offer some of his star players extra rest, when their rivals are not doing the same.

Equally, it would be wrong to think that the likes of Marcus Rashford and Raheem Sterling would have been relaxing at home or on holiday, had England given them extra time off to recuperate.

It’s highly likely they would have been called in for pre-season training with their clubs on the same day they’re due to report at England HQ.

Discussions over player fitness are ongoing between the FA and the clubs – Ben Chilwell, Luke Shaw, Alex Oxlade-Chamberlain and James Maddison are almost certain to miss out because of injury, with Jordan Henderson another major doubt.

But it’s clear England’s manager will pick the very best players he has available to him for his squad – irrespective of the number of domestic games they have played.

That’s not to say energy levels and fatigue will be ignored during England’s preparations. The senior squad’s fitness and medical staff regularly recommend certain players train indoors or are absented from training completely to avoid injury.

The starting 11 Southgate selects for the opening Nations League game against Iceland on September 5 is likely to be dictated to a large extent by the energy levels shown by players in training sessions leading up to the game.

Last summer, Southgate employed a staggered join-up for England’s players, depending on their workload. As a result, Harry Kane, Henderson and Trent Alexander-Arnold met their England teammates the day before they all flew out to Portugal for the Nations League semi-finals – because of their involvement in the Champions League final.

There will be no staggered sign-up this time. And that’s because of coronavirus.

For a start, the compressed schedule because of the pandemic means the entire England squad will meet up just five days before their Nations League game in Reykjavik.

Add to that the fact the FA is determined to keep a tight, sterile “Covid-free bubble” around the squad and there is a reluctance to allow anyone – support staff or players – to join up later than Monday August 31.

There are also contractual media commitments the FA must adhere to. If many of the big names were absent for the first part of the training camp, it would make it difficult for those obligations to be met.

There is also principle at stake for Southgate. The two games against Iceland and Denmark are competitive matches – in a competition that proved so valuable for England’s development two years ago.

Beating Spain and Croatia in the Nations League in 2018 gave England’s young squad much-needed experience of what it takes to beat the best – and those results also helped breed a confidence and belief for what comes next – most notably, next summer’s re-arranged European Championships.

The 2020/21 season is set to begin with the Nations League and Carabao Cup before the Premier League and EFL. But when are the games and what effect will it have?

The knock-on effect of the football suspension earlier this year is starting to take shape with the 2020/21 season already fast approaching.

There will be around six weeks between the conclusion of last year’s Premier League campaign and the start of the new season, while some teams have also been involved in the Champions League and Europa League mini-tournaments.

The first two weeks of September will see a glut of games, both domestically and internationally, as competitions get back on track, starting off with the Community Shield…