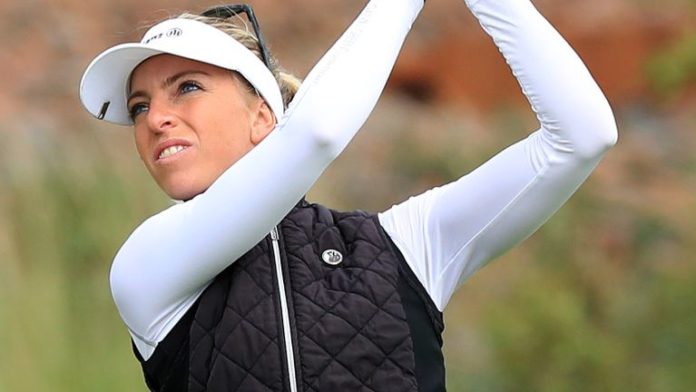 Watch the final round of the AIG Women’s Open on Sunday from 1pm on Sky Sports Golf, Sky Sports Mix or the Sky Sports YouTube channel.

Sophia Popov moved into pole position for a maiden major victory after opening up a three-shot lead heading into the final round of the AIG Women’s Open.

The German equalled the lowest round of the week with a four-under 67 on another difficult scoring day at Royal Troon, posting an eagle and two birdies to pull clear of the field.

Minjee Lee and Thailand’s Jasmine Suwannapura are the only other two players under par for the tournament, with both players on one under after third-round 69s, with Caroline Masson a further stroke back in a share of fourth alongside Lindsey Weaver and Austin Ernst.

Popov started the day a shot off the pace but moved ahead with a stunning eagle at the par-five fourth, where she elected to hit driver from the middle of the fairway and struck her approach to eight feet.

The 27-year-old burned the edge of the hole with a 10-foot birdie try at the eighth and holed clutch putts to save par at the ninth and 11th, before gauging out of the rough to 15 feet and making birdie at the par-four 12th.

Popov ended a run of pars by holing from long-range at the 17th, before closing her bogey-round with a two-putt par at the last after tentatively leaving her birdie putt short of the target.

Suwannapura is three off the pace despite a final-hole bogey, with world No 8 Lee also in the hunt after mixing three birdies with a sole blemish in her third round.

Kristen Gillman threatened the lead after making five birdies in a six-hole stretch on the front-nine, with a three-under 68 leaving her six strokes back in tied-seventh alongside Emily Kristine Pedersen and former world No 1 Lydia Ko.

Seven-time major champion Inbee Park struggled on the greens in her level-par 71, dropping her eight off the pace, while overnight leader Dani Holmqvist slipped out of contention after six bogeys in an eight-hole stretch saw her post a six-over 77.

Mel Reid is the highest-placed Englishwoman after a third-round 68 lifted her to six over and in a share of 26th, with Jodi Ewart Shadoff a further shot back and Solheim Cup captain Catriona Matthew in the group on eight over.

Who will win the opening women’s major of the year? Watch the final round of the AIG Women’s Open live from 1pm on Sky Sports Golf , Sky Sports Mix and the Sky Sports YouTube channel.