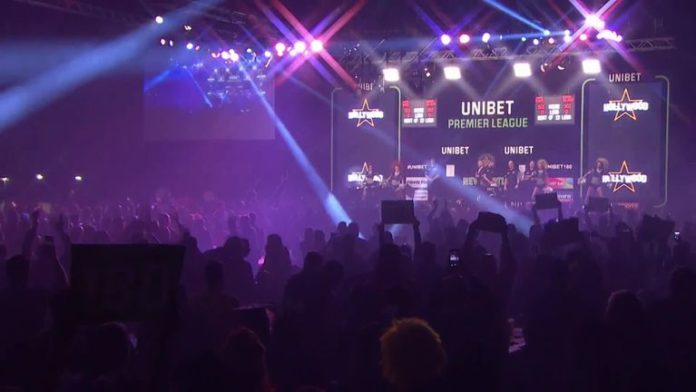 The Premier League returns from August 25-30, with six successive nights of action in Milton Keynes, live on Sky Sports

Chris Dobey is eager to emulate Dimitri Van den Bergh by claiming a breakthrough title and taking his place at the very top table in darts.

‘The Dream-Maker’ secured a shock victory at last month’s Matchplay; a win which propelled the Belgian star into the top echelons of the sport.

And ‘Hollywood’ feels he is not far away from a similar breakthrough.

“Seeing Dimitri winning it makes me more hungry than ever,” Dobey said in an interview with The Darts Show podcast.

“You look at the likes of Nathan Aspinall and Dimitri now, they’ve come out of nowhere and obviously that bit of confidence drives you on to do more and more big things. I’m looking forward to getting that first title under my belt. As soon as I get that title, I can kick-start my career and hopefully go on and do the same as those guys.

“Some people grow into the game straight away. I take little steps. I’m ready for that next step now. I’ve had my chances. I’ve had two major semi-finals. The score-line in both of them didn’t say much about the game. I’d done enough to win both of those games. You take those defeats and they make you stronger. I think I’m ready to take that next step. I’m looking forward to the back end of the year, if everything goes to plan.”

Dobey missed out on qualifying for the Matchplay, but does not have long to wait for a return to the big stage, when he takes on Daryl Gurney as a ‘challenger’ on Tuesday evening, ‘Night 7’ – the first Premier League night of the restart.

“I’ll fancy myself pretty strongly,” he said. “When I was supposed to be playing [in March], Daryl was on a bit of a downer. He was playing well, but a bit like myself not getting the results. And he was pretty much struggling. I think he has time to reflect, and put the time in as well. So I think he’ll be up for it. Hopefully it will be a decent game.

“It’s going to be a tough one [in the empty arena]. I prefer the crowd. I thrive off the crowd. It’s going to be different but I’m sure I can adjust pretty quick. I haven’t spoke to any of the lads who played in the Matchplay other than Ryan Joyce, and he said it was no different. Obviously I’ve just got to go in and do what I do best and hopefully get a result on the night.”

And missing out on a home-town reception in Newcastle comes as a disappointment.

“I was gutted when I heard the news, when these circumstances carried out,” he lamented. “I’m still there to do a job. I’m still in the Premier League for the one night. I’ve still got something to do up there.

“It’s disappointing not to be playing in front of the home crowd. So many people bought tickets for myself, that weren’t really into darts. They’re good friends of mine, wanting to see us playing, wanting to see us do well. They’re a bit more disappointed than I am. I’m still up there. I’ve still got that night ahead, so I’m looking forward to it.”

After a difficult few months, Dobey is ready to return to the oche and deliver some big results in the coming months.

“It’s a hard one to be fair, because I kind of lost a bit of interest not knowing when we’re going to be playing. Now we’ve got some dates, it gives me [initiative to] practise and put the time in for it.

“In the Summer Series I played pretty well all week to be fair. I just didn’t get the results that I needed. Other than that, I was pretty happy with my game.”

The Premier League returns from August 25-30, with six successive nights of action in Milton Keynes, live on Sky Sports. Check out daily Darts news on skysports.com/darts, our app for mobile devices and our Twitter account @skysportsdarts.