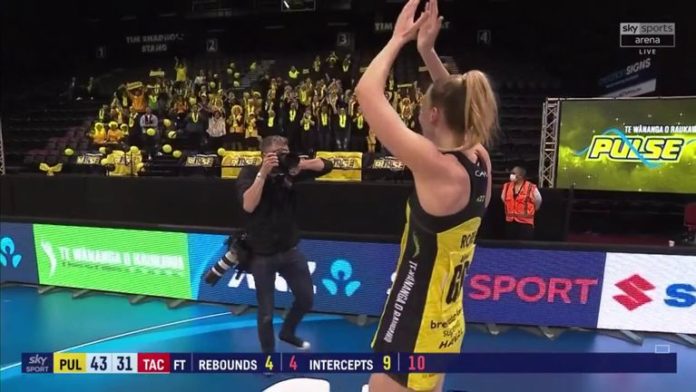 Central Pulse retained their ANZ Premiership title with a 43-31 Grand Final victory over the Tactix.

The defending champions set the tone from the very first centre pass and played with the type of intensity and pace that they are famed for.

Claire Kersten, Maddy Gordon and Karin Burger worked tirelessly in mid-court while both circles fired throughout.

The Pulse’s crisp work created a ten-goal cushion for themselves at half-time, 23-13, and despite the Tactix disrupting them in the third, they held firm to secure a second title in the same number of seasons.

⏱️ The Central Pulse (and Maddy Gordon) have flown out of the blocks and have the advantage after the first quarter.

From start to finish, the Pulse looked cool, calm and collected while the Tactix, who were playing in their first Grand Final, showed a few nerves and were punished for them.

Both teams came into this Grand Final off the back of two weeks of preparation due to the cancellation of Round Ten.

After New Zealand’s COVID-19 alert levels changed, the tenth round was erased from the schedule as were the other matches which were due to be played on the final day in Invercargill.

Head coaches Yvette McCausland-Durie and Marianne Delaney-Hoshek clearly had used their preparation time well as the first quarter was played at an exceptionally high pace and intensity.

The Pulse were the ones to set a higher bar, though, as they turned the Tactix’s first centre pass and immediately converted it to goal. As the quarter, and the half, played out, the turnovers continued to arrive courtesy of Gordon.

Gordon, one of the youngest players in the league, has enjoyed a standout season in 2020 and Dame Noeline Taurua will have been pleased to see that she looked right at home on the Grand Final stage.

Her turnovers through court, and feeding into Ameliaranne Ekenasio and Aliyah Dunn, helped secure the Pulse’s 12-6 lead after the first quarter and 23-13 advantage at half-time.

Since the season’s resumption, McCausland-Durie had used her bench superbly and in the final she introduced Tiana Metuarau at WA for 12 minutes.

Metuarau kept pace, however, the move meant that Jane Watson and Temalisi Fakahokotau gained more time on the ball. The duo work boosted their team’s confidence and their reward was a 11-8 quarter in their favour.

McCausland-Durie reintroduced her starting line-up for the final 12 minutes to great effect. As a collective they delivered a lesson in how to play Grand Final netball and never took their eyes off the prize.

After a season like no other, with rounds being postponed and cancelled, it finished familiar fashion with the ANZ Premiership trophy being lifted by Central Pulse’s captain Katrina Rore.