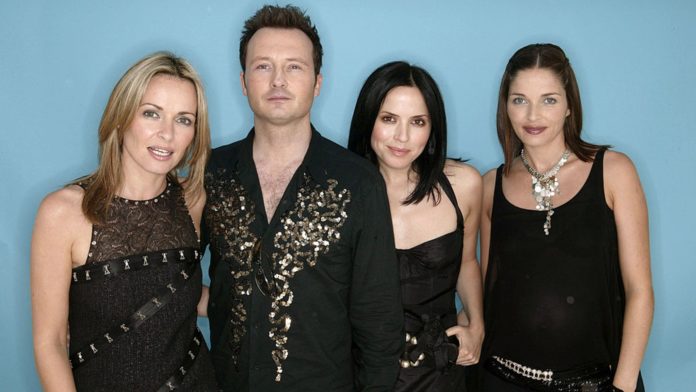 Jedward have criticised The Corrs guitarist Jim Corr after he attended an anti-mask protest in Dublin over the weekend, in a Twitter row that got increasingly personal.

In a frank post, the twins – whose real names are John and Edward Grimes – addressed all the demonstrators, telling them: “Dear Dublin Anti Mask Protest! Get the f*** inside you selfish low lives sincerely the rest of the country.”

Ireland has recently seen a spike in COVID-19 cases, and tightened its nationwide restrictions in response.

As in the UK, face coverings are mandatory for most people using public transport or going inside shops.

Earlier in the day Corr, had shared a short video of the Dublin protest, praising the “great turnout”.

Jedward quickly turned their attention to the 56-year-old, punning about The Corr’s only UK number one hit.

Alongside a poster showing Ireland’s official public health advice on coronavirus, they wrote: “G’wan leave the whole country ‘breathless’ from Covid because of your idiotic behaviour.”

The X Factor stars, who have recently attended Black Lives Matter protests in Los Angeles, said “everyone has the right to protest”, but said they drew the line when “the consequences are more deaths”. They added: “That’s not democracy it’s murder!”

They went on, with another Corr related pun, writing: “When your core message is wrong you have no legs to stand on! There’s only one right in this fight against COVID so don’t even try to question it! Change your attitude and get with the times.”

Corr, who has recently been vocal about his dislike of face coverings, replied: “Shut up you fools and grow a brain between you.”

This prompted another display of wordplay from Jedward, asking him: “Why don’t you just go and ‘Runaway’ and FYI your sisters never needed you please leave the band.”

They added: “You’re a waste of our time, we’re getting bored. May as well be talking to a brick wall. Go to bed Jim.”

Not to be outdone in the song title stakes, Corr replied: “Ireland’s Millie Vanillie have spoken and I shall hand in my notice forthwith.”

He signed off with: “But lads, I just want to say…” followed by a link to the Corr video I Never Loved You Anyway.

Jedward snapped back: “You’re the best background band member In the history of Irish music. Jim ‘it really doesn’t matter at all, cause we are so young now’ and ‘irresistible’ you’re just another #COVIDIOT good luck with your air guitar skills.”

Jedward then seemed to rethink their whole approach to the social media spat, writing: “Twitter fights are so pathetic! We don’t have time! We’re right you’re wrong. Wear your mask and wash your hands to whoever needs to hear this.”

The twins have been living in America since last year, moving in with their Celebrity Big Brother pal Tara Reid and her boyfriend in LA.

Jim Corr is the eldest of four Corr siblings, who together formed the band the Corrs in 1990 and have released seven studio albums together.

Lead singer Andrea, violinist Sharon and drummer Caroline have wisely decided to stay away from the Twitter spat, and have not commented on their stance on face masks.