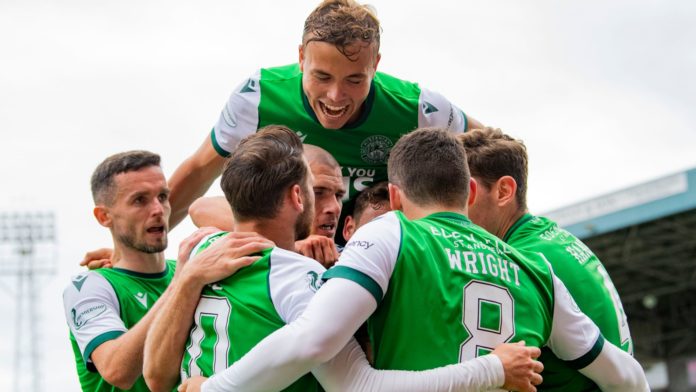 Hibernian moved level on points with Rangers at the top of the Scottish Premiership after Stevie Mallan’s stoppage-time penalty secured a 1-0 win over St Johnstone at McDiarmid Park.

The hosts were controversially denied the opener when Callum Hendry headed in Craig Conway’s cross (31), with the goal wrongly ruled out for offside.

The game looked set to end in a stalemate, but then referee John Beaton spotted a foul by Liam Gordon on Paul Hanlon inside the box and Mallan confidently dispatched his penalty beyond Elliot Parish (90+1).

Liam Craig was sent off after the final whistle for dissent as his frustrations with the match official boiled over.

The result leaves St Johnstone in eighth place on four points while Hibs move on to 13 points, level with Rangers at the summit.

Man of the match: Danny McNamara.

How Saints paid the price

These two teams had a sneak preview of each other when they played out a goalless friendly last month in Perth, and Callum Davidson would have desperately hoped for a better outcome and performance to the one produced in the 1-0 home defeat to Aberdeen on Thursday.

Last season, Saints drew 12 games in the Scottish Premiership – the joint-highest with Hearts – while Hibs weren’t far behind themselves with 10 – and for large parts it seemed this would end without a breakthrough. It was the visitors who made the better start with Parish getting down well to keep out Martin Boyle’s snap-shot inside the opening two minutes.

From the resulting corner, Hibs wanted a penalty as Boyle’s effort struck the arm of Hendry from close range, but referee Beaton correctly waved away the protests.

St Johnstone, who have remarkably now not won any of their last 13 Scottish Premiership matches played on Sunday, made a subdued start with Hendry blazing over the hosts’ first chance from Scott Tanser’s corner after 10 minutes.

In another lacklustre opening half at the start of the new season, Hibs marginally looked the more purposeful as midway through the opening period Josh Doig knocked a long ball down to Boyle, whose attempted half-volley floated over the bar.

Parish was very nearly left red-faced when his clearance cannoned into Boyle before the Hibs winger finished from Daryl Horgan’s pass but from an offside position.

But the game briefly livened up when St Johnstone were controversially denied the opener. Ofir Marciano was slow to react to Conway’s centre as Hendry nipped in to head home but it was incorrectly ruled out for offside.

Daryl Horgan was the last man, with Kris Boyd unimpressed by the decision telling Sky Sports at the break: “That could cost St Johnstone. We keep talking about how we’re going to do the right things in Scottish football, but we need to find a way to get the money to get VAR in – that’s a goal.”

Hibernian were next to feel aggrieved as moments later, it was Christian Doidge who reacted quickest to Parish saving his initial effort from a set-piece but the forward handled on the ground before hooking in the rebound.

But despite the ball being in the net on three occasions, both sides went into the break scoreless – with Saints failing to register a shot on target in the opening 45 minutes for the third time already this campaign.

But Davidson’s men made a bright start to the second period as moments after there was nobody on the end of Jason Kerr’s fine run and cross, Liam Craig set up Danny McNamara for a rising shot that was tipped over by Marciano.

That spate of goal-mouth activity failed to set the tone as neither side registered a noteworthy chance until the final 20 minutes.

Hibernian hadn’t kept three straight clean sheets in the Scottish Premiership for nearly two years and having only conceded from a penalty and set piece so far this term, Craig was optimistic of beating Marciano with his long-range drive from Michael O’Halloran’s pass as the ball veered wide.

Despite a raft of changes from both managers in the second period, it appeared there would be no late drama in Perth – but after Alex Gogic’s headed against the post, Gordon was penalised for a foul on Hanlon – allowing Mallan to clinch all three points.

St Johnstone host St Mirren in the Scottish Premiership next Saturday at 3pm while Hibernian are at home to Aberdeen on Sunday, live on Sky Sports at 4.30pm.