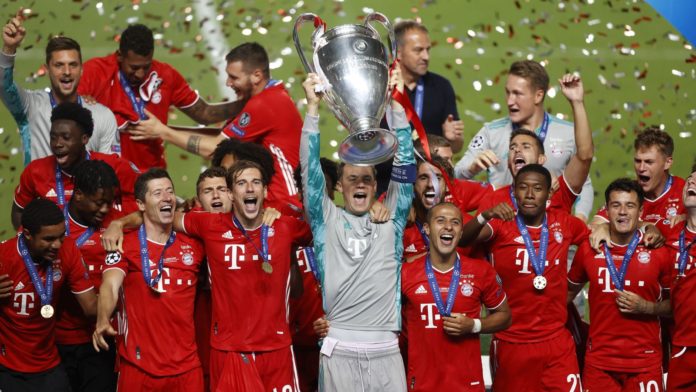 There were around 30 minutes on the clock at the Estadio da Luz when Thiago Alcantara began to purr. A no-look pass here, a nonchalant feint there. And when Thiago starts playing, his team-mates tend to follow.

After a sluggish start, the Bayern Munich machine was clicking into gear.

There is no stopping it when that happens and Paris Saint-Germain are just the latest side to find that out. Bayern came into this game having won 20 consecutive games in all competitions. Now they have won 21. Now they are European champions for the sixth time in their storied history.

No one can argue that they do not deserve it. PSG threatened, particularly early on. Kylian Mbappe had chances and so too did Neymar. But Bayern held their ground at one end and then found a way through at the other.

The winning margin was only one goal but their superiority was clear.

It has been that way throughout this interrupted Champions League campaign. In 11 games, Bayern have scored 43 goals. Ten of them came in two meetings against Tottenham. There were seven more over two legs against Chelsea. Implausibly, they hit eight in one game against Barcelona.

PSG were spared another barrage of goals. In fact they deserve credit for their defensive resilience. But Bayern were not to be denied. Kingsley Coman scored the winner, heading home from Joshua Kimmich’s cross, but it was their strength all over the pitch that saw them through.

Much was made of how their defence would cope with Neymar and Mbappe. Questions were asked of the high line that allows them to press their opponents so high up the pitch. But Bayern boss Hansi Flick did not deviate from his philosophy and this performance showed that any talk of defensive vulnerability was at the very least exaggerated.

There aren’t many sides, after all, who could limit this PSG outfit to only three shots on target over the course of 90 minutes but that’s exactly what Bayern did. They managed it despite losing Jerome Boateng, their most experienced defender, to injury midway through the first half.

This was Bayern’s fifth clean sheet on their way to lifting the trophy. They have only been behind for 22 minutes in all competitions since the turn of the year. And even on the six occasions when they have conceded more than one goal in that time frame, they have scored a combined total of 30.

Bayern didn’t blow PSG away as they have so many other opponents in recent months, but it is of course with the ball that they are most effective and this performance was another reminder of that. Overall, they had 62 per cent of the possession, allowing them to slowly suffocate their rivals.

Thiago typifies Bayern’s supreme confidence in possession but it can be seen in every player. At times on Sunday night, and in the face of aggressive pressing, their passing out from the back was mesmerising.

What’s just as important, however, is the speed and intensity with which they win the ball back. If it’s not Thomas Muller breathing down a defender’s neck, it’s Robert Lewandowski. Every player knows his job with the ball and without it. Bayern threaten from all angles, at all times.

Flick deserves immense credit for that level of organisation – it is easy to forget that Bayern sat fourth in the Bundesliga, having just been beaten 5-1 by Eintracht Frankfurt, when he succeeded Nico Kovac in November – and for getting his big call of the night right by including Coman, who had not started against Barcelona in the quarters or Lyon in the semis.

The 24-year-old vindicated his inclusion emphatically and he is just one example of the smart recruitment that has underpinned Bayern’s return to the pinnacle of the European game.

Of the players who started on Sunday night in Lisbon, none cost more than £30m but none looked out of place. Bayern picked up Serge Gnabry for less than £7m. Kimmich was similarly cheap and they did not even pay a fee for Lewandowski or midfielder Leon Goretzka.

The worry for the rest of Europe’s elite is that Bayern Munich could now dominate the Champions League as they already do the Bundesliga.

Manuel Neuer, Robert Lewandowski and Thomas Muller are in their 30s but they all have more to give and the average age of the squad is much lower. Alphonso Davies, 19, looks like a superstar in waiting. He is not their only young talent with his best years ahead of him either.

Thiago may have played his last game for the club, of course. There is interest in the 29-year-old from Liverpool and they are unlikely to be his only suitors. But Bayern Munich’s strength is in the collective. It is in the well-oiled machinery that makes them the best in Europe.