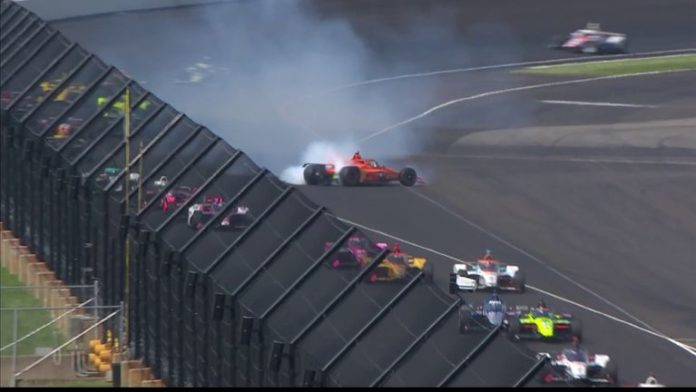 Takuma Sato claimed the second Indy 500 win of his career after overtaking long-time leader Scott Dixon in a tense and dramatic 200-lap race at the Brickyard.

But Fernando Alonso’s quest to complete the final leg of motorsport’s Triple Crown continues after he finished a lapped 21st after suffering clutch trouble in his McLaren.

Sato, the former Jordan and Super Aguri F1 driver, first won the showpiece race in 2017 and becomes the 20th driver to triumph more than once around the oval in the 104th running of the event.

Graham Rahal, Sato’s team-mate, took third after a strong performance from eighth on the grid, with former Haas F1 test driver Santino Ferrucci fourth. Rookie of the year honours went to Pato O’Ward, who was an impressive sixth in the lead Arrow McLaren SP car.

The 500-mile race featured seven yellow-flag periods and a number of heavy crashes, with the race finishing under caution after a massive accident for Spencer Pigot with four laps to go.

Pigot lost control of his Rahal Letterman Lanigan Racing car coming out of the final corner and hit the outside barrier, before careering across the track into a heavy impact with the end of the wall on the entry to the pit lane.

In total, seven drivers crashed out – while James Davidson was the race’s first retiree when his car’s front-right wheel caught fire.

Alex Rossi had been in victory contention alongside Dixon and Sato but his race unravelled spectacularly after half-distance. The American was first relegated to the back of the field as punishment for an unsafe release from his pit box when he collided with Sato, before crashing out as he attempted to race back up the order.

My first Indy500 completed! A great experience! ✊️
When we were already at half point of the comeback (P15 mid-race) we had a clutch failure..so every pit stop from there we had a manual start with mechanics pushing old school! Happy anyway! Thanks Indy ❤️ pic.twitter.com/8wmAq2KhEi

Dixon, the five-time IndyCar champion and 2008 Indy 500 winner, had started second behind polesitter Marco Andretti but immediately took the lead into the race’s first corner.

The 40-year-old New Zealander had appeared in control for most of the race, leading for more than 100 laps, but was overtaken by Sato after the penultimate caution period.

The Japanese driver came under heavy pressure into the closing laps as the leaders navigated traffic before Pigot’s crash effectively called the battle for victory off early.

“I can’t find the words!” said a jubliant Sato afterwards.

“Obviously three laps short [with the yellow flags] and we knew in terms of the fuel strategy it was a bit tight. I couldn’t use max power so had to switch back and forth. Scott was coming right through out of Turn Four, but I just held on.”