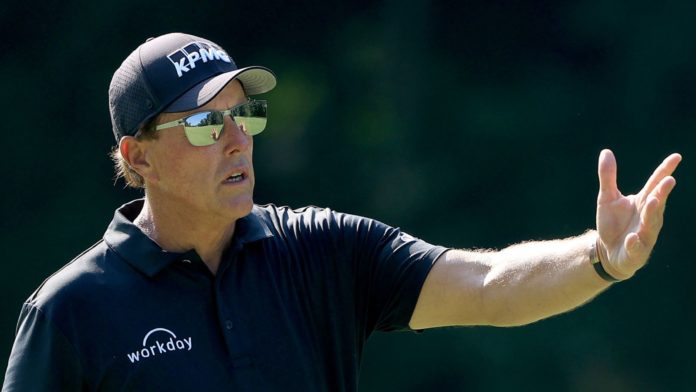 Phil Mickelson will begin a new chapter in his golfing career this week as he tees it up on the PGA Tour Champions for the first time.

The five-time major champion became eligible for seniors golf after turning 50 in June but has waited until now to make his debut, having failed to extend his PGA Tour campaign at the Northern Trust.

Mickelson missed the cut at TPC Boston despite a second-round 68 and dropped outside the top 70 in the FedExCup standings, seeing him fail to qualify for the BMW Championship – the second of the three play-offs – for the first time in FedExCup history.

The left-hander, who registered a runner-up finish at the WGC-FedEx St Jude Invitational as one of three PGA Tour top-10s in 2020, will instead feature as part of a strong field in the Charles Schwab Series at Ozarks National.

Mickelson wrote on Twitter: “I’m going to play the Champions event this Monday. I’ve been playing well and I want to play. I wish I was playing in Chicago next week but excited to play my first Champions event.”

Schwab Cup leader Bernhard Langer goes out with former world No 1 Vijay Singh and 2011 Champion Golfer of the Year Darren Clarke, with Ernie Els, Colin Montgomerie and Miguel Angel Jimenez among the other notable names in the field.

The 54-hole event gets underway on Monday in Ridgedale, Missouri, with Mickelson grouped for the first two rounds alongside two-time US Open winner Retief Goosen and USA Ryder Cup captain Steve Stricker.

Mickelson will have another chance to complete the career Grand Slam from September 17-20 at the US Open, live on Sky Sports, with Winged Foot the venue for one of his six runner-up finishes at the event.