Home World The key to unlocking peace with N Korea 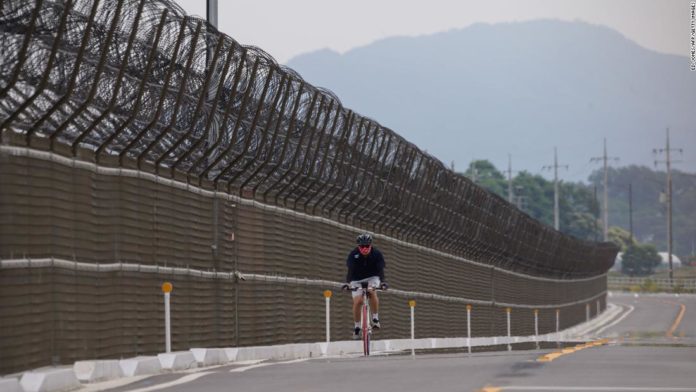 But for some of us, the DMZ is also home.
Resolving tensions along the border and creating an environment where two countries can peacefully co-exist is an opportunity within our reach.
I am the Governor of the Gangwon Province — a region cut in half by the 1953 Armistice Agreement. Our northern border marks the boundary between the two Koreas. Perhaps no other region of South Korea is more aware of the dangers of war — or more open to possibilities for peace.
One such opportunity is found in an unlikely place: Mount Kumgang, a resort town located just over the border in North Korea.
The “Diamond Mountains” — as we refer to the region — have inspired Koreans since ancient times, and for 10 years from 1998, it was a thriving tourist destination that welcomed two million South Koreans. Managed together by North and South, the resort was a precious example of cooperation between the two countries.
However, South Korea stopped taking people across the border in 2008 when a North Korean guard shot dead a tourist who entered a restricted zone. Today, the site stands as a reminder of what might have been.
But that opportunity is not lost. We’re seeing the start of the return of tourism, with the hope and expectation that it will only increase as we put this pandemic behind us.
So, it is not too early to discuss the idea — counter-intuitive to some — of tourism on the border of North and South Korea.
The benefits to both Koreas — along with the United States and every nation with a stake in the stability of the Peninsula — would be profound. It would promote peace, advance efforts at denuclearization, and increase US and South Korean leverage at the negotiating table.
First, a renewed partnership at Mt. Kumgang could strengthen economic ties between North and South — and reverse the damage for private businesses that have lost $1.3 billion since the site’s closure. Renewed economic relations could also relieve wider tensions on the Peninsula. It is a fine thing to talk together, but even better to have a reason to work together. A partnership at Mt. Kumgang might provide a model for other efforts.
Cultural ties, too, would strengthen. For years, families torn apart by the Korean War have reunited at Mt. Kumgang. Parents have wept tears of joy upon seeing children for the first time in decades. Long-lost siblings have relived cherished memories. Reopening Mt. Kumgang would provide a powerful symbol of what unites us, and hope for achieving enduring peace.
This might sound like a lot to expect of a single tourist site. But Koreans understand the power of culture to connect us. At the 2018 PyeongChang Winter Olympics — also hosted by my province — North and South Korean athletes marched together into the opening ceremony during a historic display of unity. That moment opened the door to a series of meetings between Kim Jong Un and South Korean President Moon Jae-in, and the historic summit process between Kim and President Trump.
As with any issue concerning North Korea, risks must be frankly acknowledged. Our greatest responsibility is protecting our people, and a tragedy like the one that occurred at Mt. Kumgang in 2008 must never happen again. The resumption of tourism would require both governments to ensure the safety of visitors.
Partners of South Korea, including some US officials, have also voiced concerns and opposed tourist sites like Mt. Kumgang, claiming they undermine United Nations sanctions against the North. However, international law allows revenue from individual tourists to flow into the North, so this should not present an obstacle. Sanctions must and can be safeguarded under any agreement regarding Mt. Kumgang.
For 70 years, South Korea’s alliance with the United States has been a force for peace and prosperity in the region. In that spirit, I urge the US to support reopening Mt. Kumgang.
This year continues to bring rising tensions between North Korea and the international community. In such a moment, small steps like this might seem unimportant. But I believe they are even more important.
The path to peace is sometimes taken in giant leaps. But other times the best way forward is through smaller strides.
It was an American President, John F. Kennedy, who said: “Peace is a daily, a weekly, a monthly process, gradually changing opinions, slowly eroding old barriers, quietly building new structures.”
Mt. Kumgang can serve as a bridge of diplomacy between North and South Korea. And that bridge, someday, might lead to lasting peace.