Home Sport Toughest seats in F1: Who’s up against it? 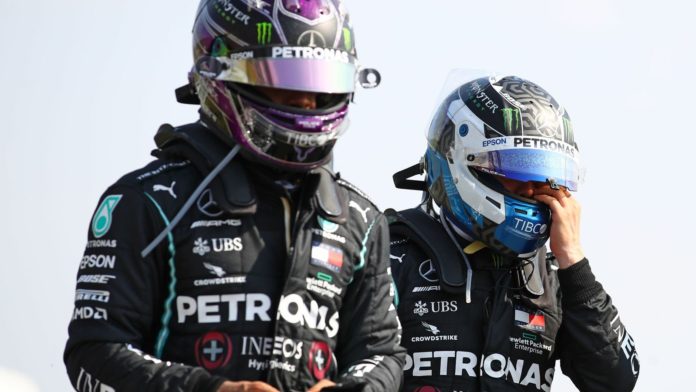 Who’s up and who’s down? The early state of play in this season’s 10 team-mate match-ups after six races; watch the Belgian GP this weekend live only on Sky Sports F1 and Main Event

“I think they’re probably two of the hardest seats in Formula 1, to be either the team-mate to Max or indeed to Lewis.”

The verdict of Red Bull boss Christian Horner when speaking recently on the F1 Nation podcast about the challenges faced by Alex Albon and Valtteri Bottas against the respective might of Max Verstappen and Lewis Hamilton in the same team.

F1 yardsticks certainly don’t get tougher than Hamilton and Verstappen – but they’re not the only drivers setting impressive benchmarks through the field so far this season, as the team-mate comparisons at all 10 outfits from the 2020 season’s first half-dozen rounds show below.

Note: Grid penalties are discounted when calculating qualifying head to heads, while no race-day score is awarded if both a team’s cars fails to finish or at least one car fails to start.

THE STORY SO FAR
The margins have regularly been small between the Mercedes drivers in qualifying, but Hamilton’s 5-1 advantage on race day is ultimately what’s telling loudly in the head to head – and indeed the world championship – right now.

Since starting the season with an impressive victory from pole position in Austria, Bottas hasn’t finished ahead of the six-time champion on a Sunday and, with the misfortune of a tyre failure costing him 18 points in the second race at Silverstone, he’s even further behind in the points than he would otherwise be. Hamilton remains as fast and, crucially, relentless as ever.

THE STORY SO FAR
Vettel started the season by outqualifying Leclerc in two of the first three events but the trend since has been one of Saturday struggle for the four-time champion. He has dropped out in Q2 three times already, with the Silverstone double-header proving particularly torrid.

Despite the limitations of Ferrari’s 2020 car, Leclerc has finished on the podium twice already and has more than double Vettel’s points, despite suffering one more retirement after an electrical-related DNF last time out in Spain. It remains to be seen whether Vettel’s strong one-stopping run to seventh place in Spain is a turning point for the German’s season, his last at Maranello.

*both drivers retired from the Styrian GP after colliding, so no score is awarded for that race

THE STORY SO FAR
As Albon has been finding out over the past year, there are indeed few harder jobs in motorsport than being team-mate to Verstappen. The Dutchman, shorn of some of the inconsistences of his very early years in F1, has been setting a high and relentless bar for Albon, with Verstappen the quickest Red Bull in every qualifying session so far and the best finisher in the five events since they both retired from the season-opener.

After Q2 wobbles in Austria and Silverstone, Albon returned to the top-10 shootout at the last two events but still trailed Verstappen by an average of 0.6 seconds in Q3. His race craft has got him out of some qualifying holes this season, but it’s that Saturday record and gap to the lead Red Bull where there are some big long-term gains to find.

*both drivers retired from the Austrian GP, so no score is awarded for that race

THE STORY SO FAR
Norris narrowly won the qualifying duel against Sainz last year and, thanks in part to the only 100 per cent Q3 record outside of Mercedes and Verstappen this year, he leads again by two after six rounds of 2020.

The Briton is also 4-2 up on race day, although Sainz has experienced more misfortune with a points-losing tyre failure when running ahead of Norris at Silverstone and pit-stop delays at two other races.

THE STORY SO FAR
One of F1 2020’s most eagerly-anticipated team-mate match-ups is currently going comfortably in Ricciardo’s favour. Ocon is yet to outqualify the Australian in dry conditions, with the Frenchman excelling in the wet at the Styrian GP to take fifth on the grid and his only intra-team Saturday ‘score’ so far.

Ricciardo has generally made his higher grid positions count on race day too, with Ocon beating him just the one time when both have finished. While the gaps haven’t always been huge, Ricciardo has looked the man more likely to bag a strong result for Renault – as he did with fourth place at the British GP when others hit tyre trouble.

THE STORY SO FAR
It’s 6-0 to Gasly on Saturdays so far this year, and 13-2 overall since his return to Red Bull’s junior team last August, with the Frenchman certainly in the groove against Kvyat over a single qualifying lap. In fact, his four Q3 appearances so far this year is the same number as Red Bull’s Albon and one more than Ferrari’s Vettel.

Kvyat has regularly moved up the order from his mid-grid starting positions, but Gasly has still taken the team’s two standout results with seventh-place finishes in both the Austrian and British Grands Prix.

THE STORY SO FAR
Whichever metric you use for Racing Point so far this year, there has been little in it between the drivers in the head-to-head match-ups so far.

Stroll has been the one constant at all six races and, armed with the best car of his F1 career, he has left behind the Saturday struggles of past seasons and proved a consistent top-10 performer with points finishes in all five races he has finished. Sergio Perez is on a run of 10 consecutive points finishes dating back to last season but facing a sterner intra-team challenge this time around.

*Hulkenberg did not start the British GP, so no score is awarded for that race

THE STORY SO FAR
The first half-dozen races have been tough going for both Alfa Romeo drivers, with Antonio Giovinazzi’s attrition-assisted ninth place from the opener in Austria the team’s only meaningful result so far.

Continuing the trend which started to develop in the second half of last year, it has been Giovinazzi who has often been the quicker qualifier this year – although Raikkonen claimed their only Q2 appearance so far last time out in Spain. Indeed, Kimi has still worked his way to a better race result more often, although doesn’t yet have any points to show for his 18th season of F1.

THE STORY SO FAR
The Grosjean-Magnussen partnership is now in its fourth season and, although there hasn’t been much between them, it’s the latter who is ahead more often in 2020 so far.

With the VF-20 regularly on the fringes of the Q1/Q2 cut line, Grosjean has got through to the second stage twice – but it’s Magnussen who delivered the team’s hitherto only point in Hungary after the team’s canny call to pit for dry tyres on the formation lap shot both cars up the order, even if it was technically against the rules.

*both drivers retired from the Austrian GP, so no score is awarded for that race

THE STORY SO FAR
A different team-mate for his second season of F1, and a quicker car, but no change to George Russell’s status as Williams’ fastest driver across a Grand Prix weekend. He maintains his immaculate F1 qualifying record and qualified for Q2 for four consecutive races up to Spain, even if the team still aren’t quick enough to secure a point in normal circumstances.

Nicholas Latifi also made Q2 for the first time in Hungary and was one place outside the points on his debut in Austria thanks in large part to an unusually high retirement rate.