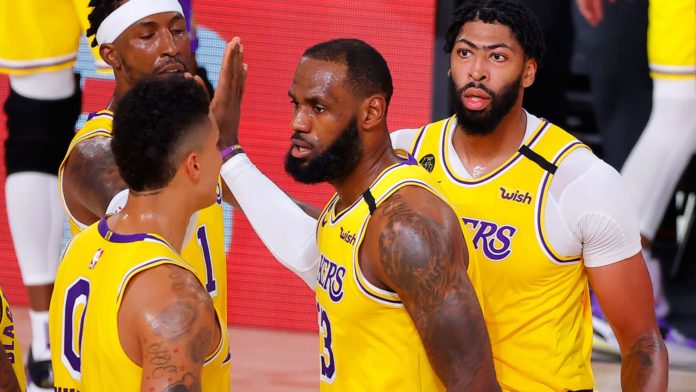 Shaquille O’Neal said his former team the Los Angeles Lakers were woken up by their upset loss to the Portland Trail Blazers in Game 1 of their Western Conference first-round series.

Inspired by 34 points from their superstar Damian Lillard and helped by the Lakers’ woeful 5-of-32 return from three-point range, Portland struck the first blow with a 100-93 Game 1 win.

The tune has changed enormously since then. The Lakers reeled off three straight wins in Games 2, 3 and 4, two of which came by 20-plus point margins.

After shooting a meagre 35.1 per cent from the field in Game 1, the Lakers shot 47.8 per cent, 50.0 per cent and 56.3 per cent respectively in their subsequent trio of victories.

With their shooting trending upwards and with Lillard out with a sprained knee, the Lakers enter Game 5 heavy favourites to wrap up a series win and send Portland home.

O’Neal feels the surprise Game 1 defeat has ultimately been beneficial for the Lakers.

“Portland came [into the bubble] focused and Damian Lillard had some spectacular games. They said publicly they wanted the eighth spot and they got it. Came in [against the Lakers] in Game 1 and surprised everybody,” the 15-time All-Star said. But what they did was wake the Lakers up.

“Sometimes when you have a team that is very talented you have to knock them in mouth to get them refocused.

“The Lakers are now playing inspiring basketball. LeBron has been doing his thing, the other players have been shooting the ball well. Danny Green hasn’t found the ‘Danny Green form’ yet but he is hitting some timely shots. And Anthony Davis, since I challenged him after Game 1, has been playing some excellent basketball.”

O’Neal’s fellow Inside The NBA analyst Charles Barkley predicted Portland would win the series in a four-game sweep after the Blazers’ Game 1 win. The former MVP has been forced to eat his words, something he believes is primarily due to the performances of the Lakers’ role players.

“If you go back to Game 1, LeBron and AD did their thing and nobody else shot the ball well,” he said. The Lakers are not a good three-point shooting team. But look at the last three games.

“LeBron and AD are constant. If the role players – Kentavious Caldwell Pope and Danny Green – can keep playing like they are playing now, the Lakers are going to be tough to beat.”