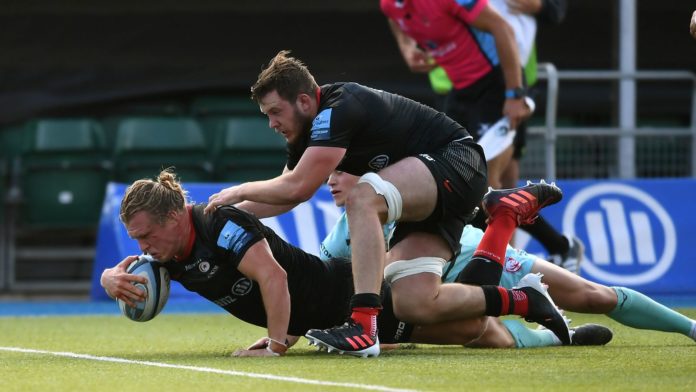 Tom Woolstencroft enjoyed a dream first outing with the Saracens captaincy by scoring a hat-trick in their 36-20 victory over Gloucester at Allianz Park.

The hooker, standing in in the absence of Brad Barritt, delivered a standout performance by dotting down three times in 20 minutes, while a Ben Harris try on his debut and Tom Whiteley’s effort capped the win.

Stephen Varney, Henry Walker and Louis Rees-Zammit did notch tries for the visitors but Saracens proved too good in the second half to secure their 11th league win of the season and leave Gloucester eighth.

The hosts made 14 changes to the side that defeated Harlequins, including handing club debuts to Will Hooley and Harris.

But the big news heading into the game surrounded Elliot Daly’s return from a hamstring injury to make his first-ever start at outside centre for Saracens.

The England international, who had featured seven times since joining from Wasps last summer before the season was postponed in March, had been absent from the Premiership’s return but delivered an encouraging showing.

But it was the visitors, who themselves handed club debuts to Jordy Reid and Josh Gray, that got the scoring under way in the fourth minute when Lloyd Evans coolly slotted his penalty kick over from 40 metres.

It did not take long for Daly to get involved, though, as he levelled proceedings with a penalty kick of his own shortly afterwards.

Saracens then took the lead for the first time 15 minutes in when two bits of good work at the breakdown resulted in two penalties, Daly slotting over from long range again before Manu Vunipola also got on the board.

The visitors did dot down shortly before the break when captain Mark Atkinson found Henry Trinder who in turn set Varney free to score his third try in as many games.

But Harris ensured Saracens took a lead into the break when he beat several tackles to go over on debut.

The hosts picked up where they left off minutes after the restart and notched their second try through Woolstencroft, who picked his spot to score at the end of a brilliant driving maul.

This was quickly followed by another score from the hooker in carbon copy fashion to extend Saracens’ lead to 16 points.

In the final quarter, Gloucester added a second try when replacement Walker went over, but Woolstencroft confirmed the result when he completed his hat-trick after another driving maul before Whiteley added a fifth try late on.

There was still time for a third Gloucester try when Rees-Zammit showed his pace to finish in the corner, but the defeat leaves George Skivington’s side 12 points outside the top four.