Home Sport What next for new cult hero Alen Babic? 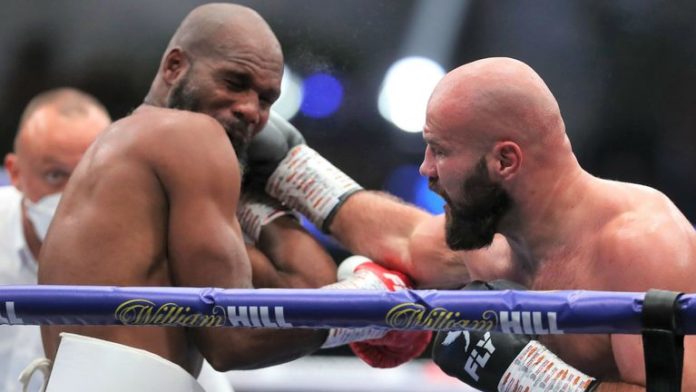 Babic on Hrgovic: “We are opposites, we are so opposite, I will never be like him. He has nice cars, I drive a 15-year-old SEAT Ibiza”

Alen Babic has placed Dave Allen and Filip Hrgovic on his hit-list as he warned that his alter-ego of ‘The Savage’ will continue wreaking havoc.

Croatian heavyweight Babic is a protege and sparring partner of Dillian Whyte’s and won his most-recent fight in less than two rounds – he is now 4-0 as a professional and has never been extended beyond the second round.

“They are mentioning Tom Little right now, for next month,” Babic told Sky Sports’ Toe 2 Toe podcast about his next fight. “I said, ‘of course, I’m in’.”

Little has shared a ring with Hrgovic, Daniel Dubois and David Price in the past two years.

Babic continued: “I want Dave Allen because it would be easy to bring out ‘The Savage’ because I don’t like him!

“Little is a genuine, nice guy and it would be hard to bring ‘The Savage’ out. But for Allen? It would be natural.”

Former nightclub doorman Babic reserves special animosity towards his fellow Croatian Hrgovic, the Olympic bronze medallist who is now 10-0 as a pro.

“He is a boy born with a silver spoon in his mouth,” Babic said. “I’m all street. We are opposites, we are so opposite, I will never be like him. He has nice cars, I drive a 15-year-old SEAT Ibiza. I don’t care, I just want to do damage.

“I would smother him. I beat Shawndell Winters [last week] in the press conference. Hrgovic can’t take that because I bring the streets with me, I bring my life experience. Can he beat all that?

Babic is proud of never having been forced past the second round and has promised to continue with his all-out offensive style of boxing – but warned he does have a Plan B if necessary.

“I’m a different kind of fighter,” he said. “I don’t wait to see what he has. I just destroy everything, everybody.

“I always wanted for fans to choose my fights, that’s my dream. I don’t care who it is – Anthony Joshua, Joseph Parker, Dave Allen, Kamil Sokołowski.

“I can move really well. My coach is an Olympic coach so I can do that stuff. But against Winters? I saw no problem. With Allen? I see no problem. Little? A great guy but I see no way he can boss me around.

“I will walk through Allen. If somebody goes five rounds and I don’t take him out, then I’ll do the other stuff and win on points. But the first five rounds will be hell for everybody.”