Home Sport All eyes on Albigna at Curragh 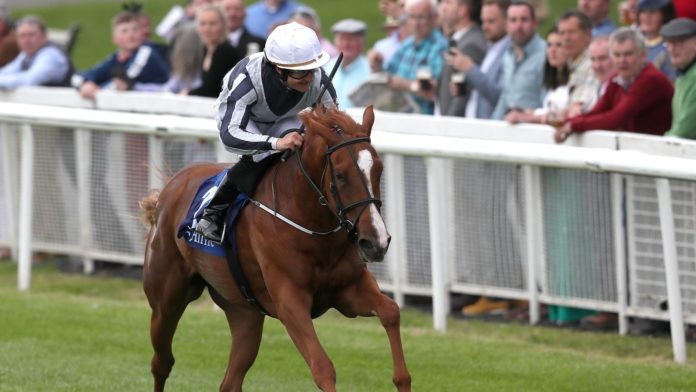 Albigna is all set to kick-start a potentially high-profile autumn campaign as she makes just her second start of the season in the Snow Fairy Fillies Stakes at the Curragh on Friday.

Jessica Harrington’s Group One winner was twice successful at this course last year, but was discomforted by good to firm ground on her return in the Tattersalls Irish 1,000 Guineas in mid-June.

Her connections are hoping she will be much more at home on going described as soft for the Group Three contest over nine furlongs.

On a high-class card which also features two further Group Three contests, both for juveniles, and the hugely competitive Paddy Power Irish Cambridgeshire, Albigna appears likely to go off a short-priced favourite.

Alan Cooper, racing manager for owners the Niarchos family, reports her back in rude health after being “a little jarred up” when finishing only sixth as the 6-5 favourite in her Classic bid.

“It’s a comeback race, so let’s hope it all goes well,” he said.

“I don’t like to predict. It’s a good opportunity – it’s very nice to have a race like that at this time of year.

“It was a bit quick for her at the Curragh, so now we’re going into this autumn campaign.”

Albigna faces a twin challenge from Aidan O’Brien’s Killarney winners So Wonderful, three places ahead of her in the Guineas, and Lovelier in a field of 10.

She was twice successful on good ground or quicker here last year – and also finished fourth on firm in the Breeders’ Cup Juvenile Fillies Turf.

Her Group One Prix Marcel Boussac victory came on very soft ground at ParisLongchamp, however.

Cooper added: “She was a little jarred up in the Guineas, so we had to back off her.

“Now she’s in very good form, so we hope this is the beginning of an autumn campaign.”

O’Brien is unsurprisingly well-represented with his two-year-olds in both the preceding Kilcarn Stud Flame Of Tara Irish EBF Stakes and then the Heider Family Stables Round Tower Stakes.

But his son Donnacha has the likely Flame Of Tara favourite in Leopardstown maiden winner Nicest, with O’Brien senior relying on Divinely to break her duck at the fourth attempt in a nine-strong field.

Ballydoyle’s Chief Little Hawk is one of five last-time-out winners among the nine declared in the Round Tower – in his case only five days after scooping the near 150,000 euro pot in Naas’ Ballyhane Stakes.

Harrington’s top weight Njord, accompanied by stablemate Onlyhuman, and Matthew Smith’s course-and-distance winner Flaming Moon are likely to be among the market leaders in the 20-runner Paddy Power Irish Cambridgeshire.