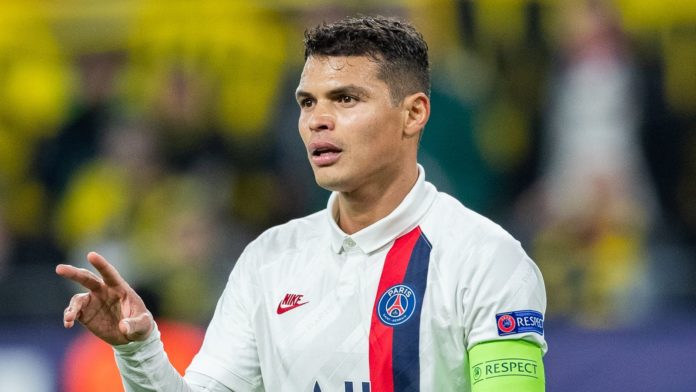 Thiago Silva has completed a move to Chelsea on a one-year deal after passing a medical on Thursday.

Chelsea have the option to extend the contract by a further year for the Brazil centre-back, who became a free agent following PSG’s Champions League final defeat to Bayern Munich.

The Ligue 1 club confirmed the 35-year-old’s exit on Thursday – despite last-ditch efforts by the Champions League runners-up to offer him a new deal.

Silva, who spent eight years with PSG after joining from AC Milan in 2012, is Frank Lampard’s sixth signing of the summer following the arrivals of Hakim Ziyech, Timo Werner, Ben Chilwell, Malang Sarr and Xavier Mbuyamba.

“I am so happy to be joining Chelsea,” Silva said.

“I am delighted to be a part of Frank Lampard’s exciting squad for next season and I’m here to challenge for honours.

With Chelsea keen to strengthen having been banned from signing players last summer, the London club could also complete a deal for Bayer Leverkusen forward Kai Havertz before the start of the new season.

Silva won seven Ligue 1 titles during his time in France, but leaves the club having failed to achieve the European success desired most in Paris.

Despite sealing a fourth-placed finish and qualification for next season’s Champions League, Chelsea struggled defensively throughout Lampard’s debut campaign in charge at Stamford Bridge.

Chelsea director Marina Granovskaia said: “We are delighted to be able to add a player of Thiago Silva’s proven world-class credentials to our squad.

“Having performed at the highest level for many years, we have no doubt his experience and quality will complement the many exciting talents we already have here.

“Thiago will be an excellent fit and we hope he can add some new trophies to his impressive list of honours.”

It is, in many ways, a measure of the paucity of centre-back options out there that Chelsea are turning to a 35-year-old who turns 36 next month. But on a free transfer having reached the end of his contract with Paris Saint-Germain, the Brazilian could still prove an invaluable addition.

Silva showed he can still cut it at the highest level in the Champions League final. The result was ultimately disappointing for him and for PSG, but Silva was instrumental in keeping Robert Lewandowski quiet for long periods and coped well with Bayern Munich’s pacey wingers too.

Those defensive qualities, coupled with his ball-playing ability, make him a good fit for Frank Lampard’s side but what should be even more useful is his experience – especially in a Chelsea backline which lacks it.

Silva is, after all, a serial winner. He lifted the Serie A title with AC Milan in only his second season in Europe and, since his move to PSG in 2012, he has been a part of 25 domestic trophy triumphs. Chelsea are crying out for some leadership and knowhow at the back and Silva will also be able to mentor the many young hopefuls aiming to break into Lampard’s squad. His age means he is not a long-term solution, but he has plenty to offer in the short-term.

Analysis: Chelsea can benefit from wealth of experience

Having conceded 54 Premier League goals last season, the worst record in the top half and 21 more than champions Liverpool, it was clear that Chelsea head coach Frank Lampard was not going to end his transfer business with Timo Werner and Hakim Ziyech.

Strengthening his defensive options was always on the agenda and Silva showed there is still value in bringing the 35-year-old to Stamford Bridge with an assured display in the Champions League final, despite his side falling short.

Chelsea may have to offload one of their four senior centre-halves in order to raise funds: Fikayo Tomori has been linked with a loan move to Rennes while Andreas Christensen and Antonio Rudiger are entering the final two years of their current deals.

But for those who stay on next season, Silva will offer a wealth of experience and will aid the development of the highly-rated 18-year-old defender Xavier Mbuyamba – the Dutchman signed after cancelling his contract at Barcelona and dubbed the ‘next Virgil van Dijk’.

Lisbon didn’t provide the perfect send-off for the PSG club captain in his 315th and final game, but the centre-back did impress against Europe’s top marksman Robert Lewandowski and marshalled the back four superbly for an hour before the breakthrough.

His important block to deny Kinglsey Coman a second with the shackles off the Bavarians kept his side in the game.

In his eight years in Paris, Thiago won seven Ligue 1 titles, and he showed his leadership again as the defensive pivot on Sunday – completing more passes (38) and having more touches (57) than any other team-mate, while his six clearances was also a game-high contribution.