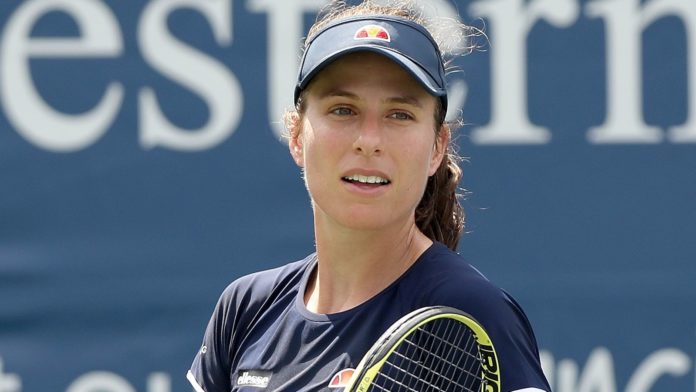 Johanna Konta’s bid to make the Western & Southern Open final in New York came to an end at the hands of the experienced Victoria Azarenka on Friday.

Konta will be involved in an all-British tie with Heather Watson at the US Open next week where she will be chasing her maiden Grand Slam triumph, but the British No 1 had other things on her mind before the start of the tournament at Flushing Meadows, namely trying to reach her ninth WTA final.

After play was suspended on Thursday in protest at the shooting of Jacob Blake, Konta stepped out onto Court 10 in good spirits ahead of her second semi-final of the year, having made the last four at Monterrey, Mexico, in March – before tennis was suspended due to the pandemic.

But two-time major winner Azarenka proved to be a step too far for Konta, despite winning the opening set, as she fell to a 4-6 6-4 6-1 defeat.

Konta saved a break point on her opening service game before taking advantage of some Azarenka profligacy to open up a lead over a determined former world No 1.

Azarenka, 31, the Australian Open winner in 2012 and 2013 but now ranked 59th, was unable to cope with the speed and power coming over the net from the Konta forehand in particular.

The world No 15, failed to convert six set points on the Azarenka serve in the ninth game, but she held her nerve to serve it out in the next game and move a step closer to Saturday’s final.

Konta had met Azarenka three times previously, winning two of their matches, the last a comfortable win in Montreal in 2018.

But this was proving far trickier for Konta and, after three breaks of serve in the opening four games, the Belarusian held serve for a 4-1 lead. The next three games went with serve before Azarenka dumped a backhand into the net to hand Konta a route back into the second set.

However, an ultra-aggressive Azarenka broke Konta’s serve for the third time in the set to take the match into a decider.

The momentum appeared to be with Azarenka as the 29-year-old Brit struggled to maintain consistency on her first serve. Konta was digging deep to stay in the contest and it was not long before she eventually caved in to her opponent in the fourth game.

Azarenka sealed a further break in the sixth game before serving out the match to reach her 38th career final and first since Monterrey last year.

Azarenka will face Naomi Osaka in the final after the fourth seed from Japan defeated 14th-seed Elise Mertens 6-2 7-6 (7-5).