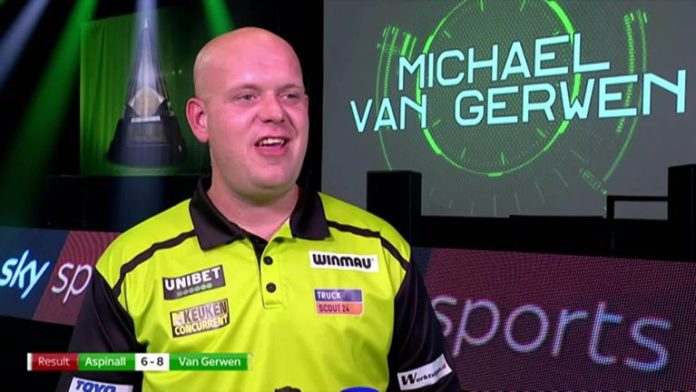 Michael van Gerwen moved up to second in the Premier League table on Friday as he came from behind to beat Nathan Aspinall in response to back-to-back defeats.

The Dutchman again was far from his formidable best, but turned around a three-leg deficit to give himself a welcome confidence boost.

With 76 PDC titles between them, Gary Anderson and Peter Wright played out an entertaining contest, won by the former after he reeled off five straight legs from 5-2 down to win 7-5.

Glen Durrant produced some outstanding darts yet again to strengthen his grip on top spot with a composed victory over Gerwyn Price, as he moved a step closer to the playoffs.

Michael Smith continued a night of comebacks with six consecutive legs en route to a win over Daryl Gurney, who remains bottom after surviving Judgement Night on Thursday.

Van Gerwen entered his match outside of the top four and facing the prospect of losing three straight matches in the Premier League for the first time ever.

It didn’t get off to a good start for the Dutchman as Aspinall took a comfortable opening leg, before MVG responded via the 25 and bull. The Asp followed up with three successive legs to build himself a 4-1 lead, triggering a 100 checkout for a 15-darter from Van Gerwen to close the gap.

An 11-darter from Van Gerwen moved him to within one and it was all square straight after as the World No 1 made it three successive legs. Three soon became four, the Green Machine taking advantage of a poor leg from Aspinall to take the lead for the first time.

The former UK Open winner responded brilliantly with a break of his own for 5-5, but Van Gerwen showed his class to hit back immediately. He built on that by mopping up a missed opportunity from Aspinall to guarantee a point, only for Aspinall to frustrate him with an 81 checkout for a timely hold to put the pressure on.

Van Gerwen wasn’t to be denied though, finding double tops to seal a much-needed win.

Wright was the first of the two reigning World Cup winners to get off the mark, before doubling his lead with the opening break courtesy of a 102 checkout having put the pressure on with a 171 visit. Anderson then failed to take advantage of a Wright miscue and back came Snakebite to go 3-0 ahead.

The Flying Scotsman won his first leg of the night despite almost aiming for the double tops instead of the double 16 that he required. The two-leg deficit was back to three shortly after as Wright produced an 11-darter, to which Anderson responded with an important hold.

Anderson was a bullseye away from a 124 finish for an invaluable break of throw and after a Wright error, he accepted the return visit with open arms to make it 5-4. He was then allowed to get away with his own miscalculation by pinning double tops to make it all square at 5-5.

Having found himself 5-2 down earlier in the match, Anderson moved 6-5 ahead with his second break before making it five straight legs to secure at least a point. He couldn’t find tops to make it six in a row, but used the return visit to complete a superb comeback.

Duzza beats Price to extend lead at the top

Durrant edged a nervy finish to the opening leg to hold his throw after the pair had exchanged three miscue visits before the Premier League leader found double one to go ahead.

The Ice Man hit back immediately only for Durrant to restore his lead thanks to a 25 checkout after putting himself in the ascendancy with a 171 visit early in the leg. Durrant then produced the first break of the match on double tops having come up with another 171 to pull away.

A one-leg cushion became two on the next when Duzza took out double 16 having been afforded another visit by Price after squandering a chance at 106. The Welshman threatened to kick into gear after a sluggish start with a 116 checkout to reduce the deficit to 4-2, following it up with double tops to capitalise on a Durrant mistake for a break of throw.

Two successive legs from Durrant were met by a 140 checkout from Price for 6-4, before the former guaranteed himself a point and then took out 50 for the match to extend his lead at the top.

Smith started the closing match of the night with a confident hold of throw in 15 darts before Gurney maintained the early high standards to level it up.

Bully Boy then missed nine darts at double to open the door for Gurney to break for the first time, although Super Chin couldn’t capitalise as Smith won four straight including a 112 checkout on the latter to make it 5-2.

Four consecutive legs became five and then six in quick succession, the sixth seeing him take out 10 after Gurney had spurned a return visit having failed to finish off 100.

Gurney kept the match going with his third leg after sinking just his third double of the evening, but the 14 he had missed were finally punished when Smith cleaned up 24 to return to winning ways.

Coverage of the Premier League continues on Saturday night from 7pm on Sky Sports Action.