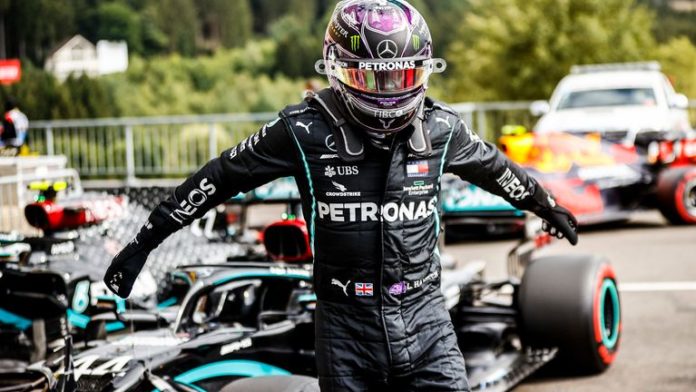 Hamilton crushes rivals and track record to take pole, 0.5s ahead of Bottas and Verstappen; Ricciardo fourth for Renault; Both Ferrari drivers knocked out in Q2; Watch Sunday’s race at 2.10pm on Sky F1

Lewis Hamilton claimed his 93rd F1 pole position in dominant fashion by streaking clear of his rivals in Belgian GP qualifying, with team-mate Valtteri Bottas narrowly holding off Max Verstappen in a session which was notable for its scintillating speed as well as Ferrari’s lack of it.

While Hamilton came into the shootout fearing some of his rivals, new and old, at the legendary Spa-Francorchamps, the championship leader topped every Saturday segment before smashing the track record twice in Q3.

Hamilton added: “I woke up to the news of Chadwick Boseman passing away and that news broke me. It wasn’t easy to get back in focus but I wanted to drive to perfection for him.”

Perfection, it was. His final advantage was more than half a second to Bottas in the same Mercedes car, with Verstappen, qualifying closer to pole than at any time this season for Red Bull, just 0.015s off a front-row start.

Daniel Ricciardo was only a few tenths further back in the Renault, impressively beating Red Bull’s Alex Albon, with Esteban Ocon also fast and ahead of the Renault-powered Carlos Sainz, the Racing Points and Lando Norris.

Absent from the top-10 fight entirely were Ferrari, who have hit a new low in Belgium this weekend.

While they – barely – avoided an embarrassing Q1 exit, Charles Leclerc and Sebastian Vettel qualified only 13th and 14th for a team, severely lacking straight-line-speed, who locked out the front row at Spa last season.

After being out-paced in both Friday sessions, Hamilton confessed that he believed Red Bull were quicker in Spa – a theory which was dismissed with his own pace throughout Saturday.

Bottas had kept Hamilton honest, until the final shootout when both of Hamilton’s laps would have been enough for pole, while Verstappen – aided by a last-lap tow by Albon – so nearly snatched second place.

“We thought it was going to be very tricky for us but overall we can be very pleased,” said Verstappen, who will be hoping the forecast rain on Sunday arrives.

Renault have been the other stand-out team, and Ricciardo made the most of their impressive low-downforce package, which regularly saw him and Ocon fastest on the straights, to secure a second-row start.

Racing Point, fourth and fifth at the last race in Spain, fell back to eighth and ninth.

Ferrari’s engine power, or lack of, has been a theme all season and it was highlighted at Spa. Not only were Leclerc and Vettel both knocked out in Q2 together for the first time, but the other Ferrari-powered drivers were all eliminated in Q1.

“It’s difficult to find an explanation,” admitted Leclerc. “We need to find the issue.”

Vettel added: “It’s the true picture – it’s what the car can do. It’s not a surprise.”

That allowed George Russell to once again flourish and make it through to Q2.