Home Sport Why is Donny van de Beek in demand? 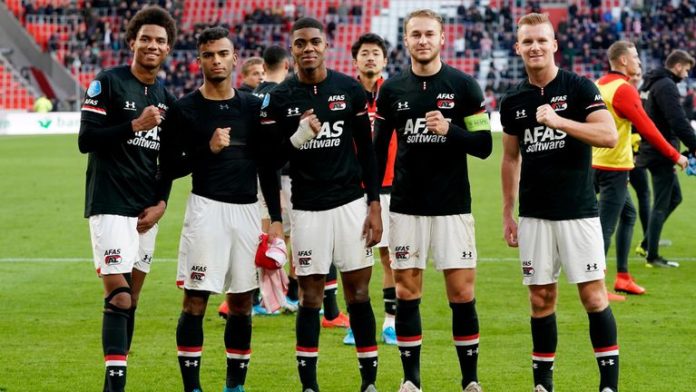 Donny van de Beek is a man in demand. Top clubs including Manchester United, Real Madrid and Barcelona have been linked with him, but why is he garnering so much attention?

Van de Beek has spent his career thus far with Ajax, joining their youth academy in August 2014. He rose through the ranks and also featured for Jong Ajax – the club’s reserve team – before making his first-team debut in November 2015 during a Europa League encounter with Celtic.

He became a first-team regular the following season while still a teenager, with rumours of potential moves to Tottenham, Roma, Barcelona and Bayern Munich early in his senior career.

Van de Beek truly burst onto the European scene as part of the electrifying Ajax side that reached the Champions League semi-finals last season. He was one of their standout young stars alongside Matthijs de Ligt and Frenkie de Jong – now at Juventus and Barca respectively.

He scored three goals on Ajax’s incredible run to the last four, including the only goal of the game against Tottenham in the first leg of their semi-final tie. He scored a further nine in the Eredivisie as Ajax won their first league title in five years with 10 assists.

Van de Beek continued his Champions League scoring streak in London with a goal against Chelsea in a dramatic 4-4 draw at Stamford Bridge in November, but Ajax just missed out on a last-16 place. They subsequently dropped into the Europa League, where they were knocked out by Getafe in the last 32.

Although the Eredivisie season was voided due to the coronavirus pandemic, Van de Beek was on his way to matching – or surpassing – his league goal tally from last season, scoring eight times with six assists in 23 appearances, missing only two games due to a hamstring injury early in the campaign.

“Last year, we made verbal agreements with [Andre] Onana, [Nicolas] Tagliafico and Van de Beek to stay another season, and then we look to help each other and find the next step in their careers. Nothing has changed. There won’t be a 50 per cent discount. The clubs can forget about that.”

What makes him so special?

With incredible versatility, Van de Beek can operate in a central or attacking role and has been described as the classic box-to-box midfielder.

The 23-year-old has the ability to play anywhere across the middle – a trait that will only increase his value – and as well as being that vital link between defence and attack, he is more offensively minded than other central midfield players. He has developed that special talent of making late runs into the area to latch onto forward passes, catching out even the most astute of defenders.

But he’s also not afraid of sitting deep and doing the hard work when he needs to. According to WhoScored.com, Van de Beek makes an average of two tackles per game in the Eredivisie – the fourth highest in the Ajax squad – and can help out in a more defensive role when needed.

Even fellow countryman and former Ajax assistant manager Dennis Bergkamp had him pegged as a special talent at a young age. In quotes carried by the Daily Mail, Frank de Boer, who Bergkamp worked under at the club, recalled: “Dennis started talking enthusiastically about a talent in his youth team. It was a boy who reminded Dennis of himself at that age. That was the signal for me to keep an eye on that guy. That was Donny.”

Where would he fit best?

According to a report in the Daily Mirror, Ajax chief Edwin van der Sar has confirmed Manchester United and Real Madrid are interested in Donny van de Beek, with Sky Sports News’ chief reporter Bryan Swanson reporting in January that Van de Beek will consider a move to the Premier League.

In April, the Daily Mail reported that United want Van de Beek to replace Paul Pogba should he leave, which would be a like-for-like replacement. Ole Gunnar Solskjaer favours the 4-2-3-1 formation, with Van de Beek likely to go into that role in front of the defence. At Real Madrid, Zinedine Zidane likes to use a 4-3-3 set-up and it is easy to see the 23-year-old slotting into that three-man midfield.

“Van de Beek is perfectly suited to English football. He can also sit deep and he showcased his talents when he played in England in the Champions League against Chelsea and Tottenham in the past 12 months.

“Real Madrid are the favourites to sign him… and Manchester United have been long-term admirers. Seeing him play alongside Bruno Fernandes would be a dream come true for United fans.”

Of course, with two of the most famous clubs in the world, there will be stiff competition for places. At United, just in the central midfield area alone, you have the likes of Pogba, Nemanja Matic, Fred and Scott McTominay fighting for game time. Fred would arguably be his midfield partner having finally found his form since moving to the club and for all of Van de Beek’s talent, he is unlikely to oust the impressive Fernandes in the No 10 role.

Although Pogba is by far the biggest name of the group, he has struggled with injury this season and his future could very much influence Van de Beek’s. If rumours are to be believed and the Frenchman does enter into discussions with Real Madrid – Zidane is a reported long-term admirer of Pogba – then Van de Beek is unlikely to be their main target, paving the way for a possible United swoop.

If Pogba decides to look elsewhere or even if he decides to stay, then United will have a much larger battle on their hands.

Real Madrid already have some formidable names in midfield. Casemiro is one of the best defensive midfield players around, with Toni Kroos, Isco and Luka Modric often rotating into the team and 21-year-old Federico Valverde their latest prodigy.

However, there is the question of age – Casemiro and Isco are 28, Kroos is 30, and Modric, amazingly, is 34 – and a club like Real Madrid are always targeting young talent for the future. Van de Beek would perfectly fit that bill.

But Van de Beek’s camp are giving little away. His agent, Guido Albers, recently told Voetbal International: “What’s going to happen to Donny? Nobody knows at the moment. The interest, that is known, has been there from several clubs for a long time.

For now, with football shut down due to the coronavirus pandemic, the future for Van de Beek is uncertain. But, if like his former Ajax team-mates De Ligt and De Jong, he wants to test himself elsewhere, there will be no shortage of waiting suitors.