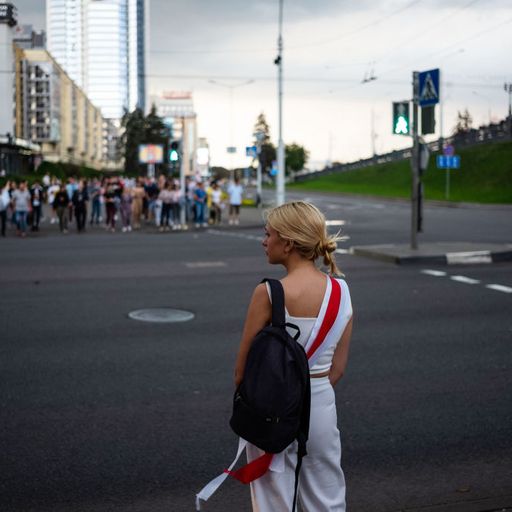 Tens of thousands of protesters have rallied in Minsk in opposition to Alexander Lukashenko, with many directing chants of “happy birthday, you rat” towards the embattled Belarusian president.
Mr Lukashenko, who refuses to stand down over election rigging claims, spent his 66th birthday on Sunday at his residence in the capital, where he was again pictured carrying an automatic rifle.

He received a congratulatory phone call from Russian president Vladimir Putin, who extended him an invitation to visit Moscow – a sign of the Kremlin’s support for the Belarusian leader amid the threat of Western sanctions.

‘There were blood smears on the walls’: Belarus protesters traumatised by brutal treatment

Meanwhile, protesters in Minsk carried balloons, flowers and the red-white-red flag which the country bore briefly during the 1990s and which has become a symbol of the anti-government protests.
Some carried cockroach puppets while others called the president a “rat” – a slur Mr Lukashenko has previously used to describe opponents.

Image: Tens of thousands of protesters were seen on the streets
The protesters converged on Mr Lukashenko’s residence in the afternoon, protected by security forces carrying riot shields – while armoured military vehicles were seen earlier driving towards the city centre.

Throughout the day, police, including some in plain clothes, bundled protesters into vans.

Image: Alexander Lukashenko was also seen carrying a rifle last week
The country’s interior ministry claimed at least 140 people were detained. Testimonies from those previously held reported severe beatings at the hands of the security services.
One of President Lukashenko’s aides, Nikolai Latyshenok, ruled out the possibility of holding talks with the opposition, and gave a personal opinion that only 20-30% of Belarusian society was opposed to the president.

Image: Security forces detained 140 protesters, the government said
The Kremlin’s support for Mr Lukashenko had been questioned, despite the importance of Belarus for the country’s European defence strategy.
Vladimir Putin announced on Thursday that the Kremlin had established a “reserve police force” at Mr Lukashenko’s request, adding it would be deployed if necessary.

Man dies after WWII bomb explosion: Call for US to clean up its ‘mess’ in Pacific