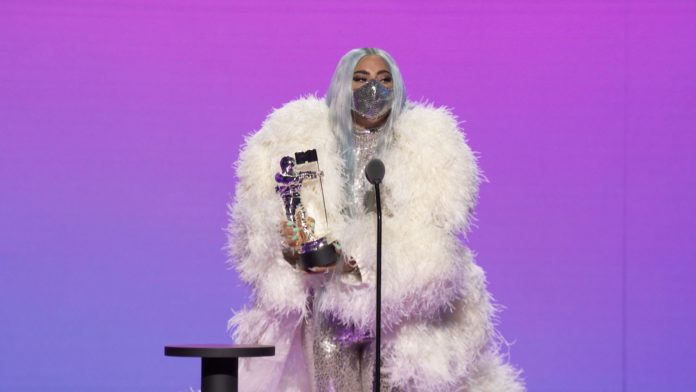 Host Keke Palmer paid tribute to Boseman at the virtual ceremony, saying: “Before we get into the music tonight, we need to talk about the devastating loss of Chadwick Boseman, an actor whose talent and passion is a true inspiration to all the fans he touched and everyone he encountered.

“We dedicate tonight’s show to a man whose spirit touched so many. He is a true hero. Not just on screen but in everything he did. His impact lives forever.”

There was also a video tribute to Boseman which included his appearance at the 2018 MTV Movie and TV Awards.

Palmer’s opening monologue also contained references to the tumultuous year, touching on the coronavirus pandemic as well the social unrest sparked by the death of George Floyd in May.

“We can never tolerate police brutality,” the actress and singer said from a set near the Empire State Building.

“It’s our time to be the change we want to see. We need to come together, and music has that power.”

Lady Gaga was the big winner of the night, picking up four honours including artist, song and collaboration of the year, as well as the first ever Tricon award, in recognition of her achievements in music, fashion and acting.

“I want to share this award with everybody at home tonight. Everybody that is their own form of a Tricon,” she said.

“This has not been an easy year for a lot of people, but what I see in the world is a massive triumph of courage.

“Just because we’re separated right now and culture may feel less alive in some ways, I know a renaissance is coming and the wrath of pop culture will inspire you and the rage of art will empower you as it responds to hardship with its generosity and love.”

Canadian artist The Weeknd took the video of the year award for Blinding Lights. He also took the award for best R&B video for the same song.

The VMAs marked the first major US awards show to take place during the coronavirus pandemic. It was filmed without a live audience and with most of the performances recorded in advance because of health guidelines.

The Black Eyed Peas closed the proceedings, with one of the group saying “Wakanda forever”, the phrase that encapsulated the black pride generated by Black Panther, as well as “Black Lives Matter“.