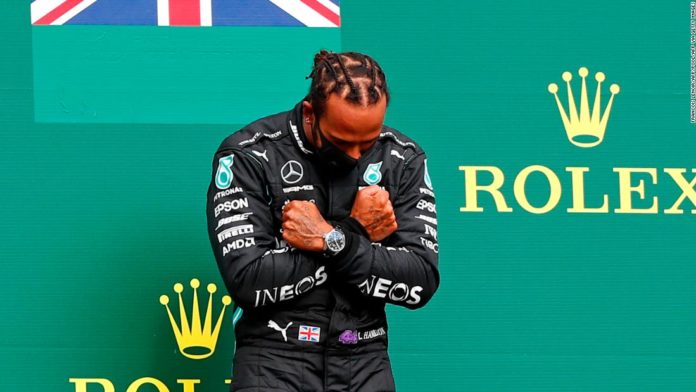 The defending world champion led all 44 laps at Spa-Francorchamps, with Mercedes teammate Valtteri Bottas in second place and Red Bull’s Max Verstappen completing the top three.
Hamilton — the only black driver in Formula 1 — was stunned by the death of the 43-year-old actor, who lost a four-year battle with colon cancer Friday night.
On the Spa victory podium, Hamilton posed in the Wakanda salute Boseman made famous as the title character in the film “Black Panther” and then spoke about the inspiration behind another famous victory.
“We are continuing to push the envelope, and it feels great to finish on a high this weekend, particularly with Chad (Chadwick Boseman) dying because he made everyone feel like a superhero,” said Hamilton.
It was his 89th career win as he chases a record-equaling seventh world championship, another historic best held by the legendary Schumacher.
However, it was another humiliating afternoon for Schumacher’s former team Ferrari, with four-time champion Sebastian Vettel in 13th place, and teammate Charles Leclerc finishing 14th, a far cry from his brilliant maiden victory at Spa last season.
Schumacher claimed 72 of his 91 wins with Ferrari, but the team are a sad shadow of that dominant past ahead of their home race at Monza and their 1,000th Grand Prix at Mugello a week later.
The contrast with Mercedes is marked, with Hamilton completely in charge, claiming his fifth win of the season. That leaves him 47 points clear of Verstappen in a one-sided title race.
“It wasn’t the easiest of races,” said Hamilton.
“I had a lock-up, which produced vibrations, at turn five and another one at the last corner, and it was a bit of a struggle, but nonetheless I think it was OK in the end,” he said.
Minor technical issues aside, Hamilton had over eight seconds to spare at the finish, with Verstappen unable to keep pace with the Mercedes pair.
Australia’s Daniel Ricciardo produced the fastest lap on his final lap, as he claimed fourth ahead of his Renault teammate Esteban Ocon, with the second Red Bull of Alex Albon rounding out the top six.
The seeds of Hamilton’s victory were sown on Saturday, when he took the 93rd pole position of his career, breaking the track record to top the grid.
An emotional Hamilton later took to social media to dedicate that qualifying performance to Boseman.
From pole, Hamilton made no mistake, quickly building a solid lead until a safety car was deployed after a heavy crash between British driver George Russell of the Williams team and the Alfa Romeo of Antonio Giovinazzi, who lost control of his car on the exit of the fast Fagnes Chicane.
Fortunately, both walked away without serious injury, as Hamilton steadily built up his lead again once the safety car was released, taking victory in imperious style and leaving the Briton almost two clear wins ahead of his closest rival in the championship standings.