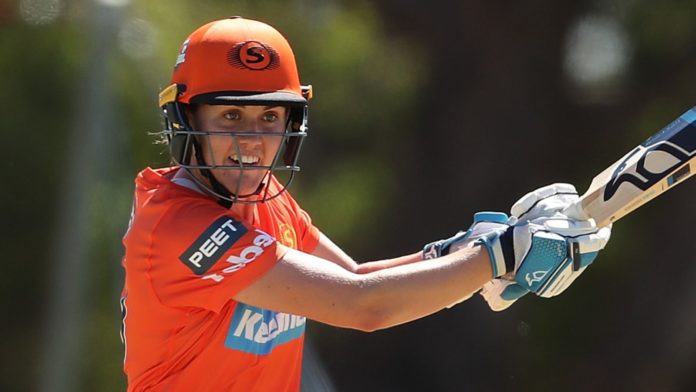 Nat Sciver scored a century and claimed two wickets in a fine all-round performance to guide Northern Diamonds to a nine-run victory over Lightning in their Rachael Heyhoe Flint Trophy clash at Emirates Riverside.

Sciver starred with the bat, scoring the first hundred in the competition from 106 balls, allowing the Diamonds to post a competitive total of 226 from their 50 overs, recovering from 24-4.

Lightning skipper Kathryn Bryce claimed five wickets and scored a half-century, but it was not enough to prevent the visitors from slumping to their second defeat in a row.

Sciver, Jenny Gunn and Linsey Smith notched two wickets apiece to clinch Diamonds’ second win in the competition, leaving them in a strong position in the North Group. Diamonds vs Lightning scorecard

Put into bat, Vipers raised a competitive 261-7 from 50 overs thanks to half-centuries from Georgia Adams, Danni Wyatt and Charlotte Dean.

Heather Knight and Sophie Luff threatened to make light work of that when scoring 67 and 60 respectively in a hundred partnership for the second wicket, only for Storm’s chase to hit the rocks in the face of an inspired spell from Norris, who was ably supported by fellow seamers Lauren Bell, Maia Bouchier and Paige Scholfield.

Handily-placed on 149-1 in the 26th over, the hosts suffered a dramatic collapse, losing seven wickets for 31 runs in 11 overs and, despite the best efforts of tailenders Claire Nicholas and Lauren Parfitt, were bowled out for 239 inside 48 overs.

Victorious in their opening two fixtures, Vipers are top of the group and, with four matches to play, have put themselves in with a decent chance of making the final at Edgbaston on September 27. Storm vs Vipers scorecard

Central Sparks secured their first win of the tournament with a four-wicket win over North West Thunder, thanks to an all-round performance that saw them chase down 136 in 44 overs.

Issy Wong excelled once again, taking three wickets (3-26), while Marie Kelly paced the chase brilliantly against some tough Thunder bowling, top scoring with 59 not out.

Wong set the tone for the match, sending Laura Marshall’s middle stump flying first ball, bowled Ellie Threlkeld for seven and had Emma Lamb caught at fine leg to reduce Thunder to 18-4, who needed a stand of 56 between Kate Cross and Olivia Thomas to get them up to 135.

Some economical bowling from Sophie Ecclestone (2-13) and Alex Hartley (2-19) ensured Sparks had to work for the victory but Kelly’s patience approach got them over the line with six overs to spare. Thunder vs Sparks scorecard

After their disappointing loss in the opening round, South East Stars came back strongly in their second outing to defeat Sunrisers by 77 runs at Beckenham, thanks to a hard-hitting 97 from England’s Sophia Dunkley.

Dunkley fell agonisingly short of bringing up the first century of the competition, but nonetheless successfully set up victory for her side, sharing a 123-run partnership for the fourth wicket with her England team-mate Alice Davidson-Richards (61) to take Stars to a total of 289-8.

With Sunrisers requiring a record-breaking effort – no side has ever chased down more than 280 in women’s List A cricket in England – captain Amara Carr tried valiantly to overcome the odds, but eventually faced double disappointment, falling for 99 as her side were bowled out for 212 in 45.5 overs. Stars vs Sunrisers scorecard