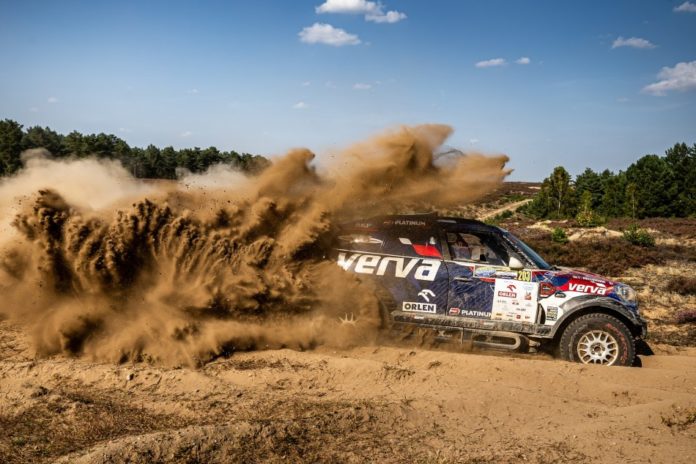 The FIA World Cup for Cross Country Bajas returns to action this weekend with Wysoka Grzęda Baja Poland (September 4-6), now running as the second round of the series.

Baja Poland, one of the most significant motor sport events in the country, is set to host the restart of the FIA World Cup for Cross Country Bajas. With competition suspended since the opening round in Russia in February, the Polish fixture has attracted a bumper entry of world-class crews all eager to get back to racing.

The FIA, with input from the World Health Organisation, has developed protocols to manage the risk associated with the resumption of motor sport amid the constraints of the COVID-19 pandemic.

Contested over competitive sections in the Szczecin, Drawsko Pomorskie and Dobra municipalities, this year’s 12th Baja Poland has moved its hub to the Szczecin-Dąbie Airfield and Sailing Centre. Competitors can, however, still expect to find similarly challenging conditions on the long military range sections on Saturday as well as the shorter sprint stages closer to the rally base on Sunday.

Having claimed honours on his home round earlier this year, Vladimir Vasilyev tops the entry list in his BMW X3. The Russian, who won the cross country series in 2014, finished third on Baja Poland in 2018 and 2019 and, like everyone, he and co-driver Vitaliy Yevtyekhov will be keen to rack up all-important points.

Having amassed numerous rally and cross country event victories and titles, Nasser Al Attiyah and navigator Mathieu Baumel are sure to be front-runners this weekend. The Qatari/French pairing have two Polish wins to their name, both in the Toyota Hilux.

Stephane Peterhansel, the reigning champion of the FIA World Cup for Cross Country Rallies with wife Andrea, is back behind the wheel of his series-winning MINI. The Frenchman finished second in 2011 and the MINI is clearly suited to the conditions having claimed podium positions for the last six years.

Bernhard Ten Brinke and Tom Colsoul are also potential event winners, Ten Brinke with two third positions in 2015 and 2017 while co-driver Colsoul also won in 2018. No one has more victories than local favourite Krzysztof Hołowczyc, the Pole with six wins on home soil. He and co-driver Łukasz Kurzeja will again be competing in the MINI John Cooper Works Rally that powered them to victory last year. Fellow countryman Jakub Przygoński is also no stranger to the podium, two second positions – in last year’s event with current co-driver Timo Gottschalk – and a win in 2018 putting the Polish/German pairing firmly in the frame for another victory.

Martin Prokop and Viktor Chytka also return to action in their trusty Ford Raptor, Prokop taking fourth in last year’s Baja series. Miroslav Zapletal, co-driven by Marek Sykora, will not only be fighting for a top position in the FIA event but in defence of his Polish and Czech titles, Baja Poland being a qualifying round of each. A host of other Polish and Czech competitors also join the T1 contenders, while five crews will be vying for honours in the T3 and T4 classes.