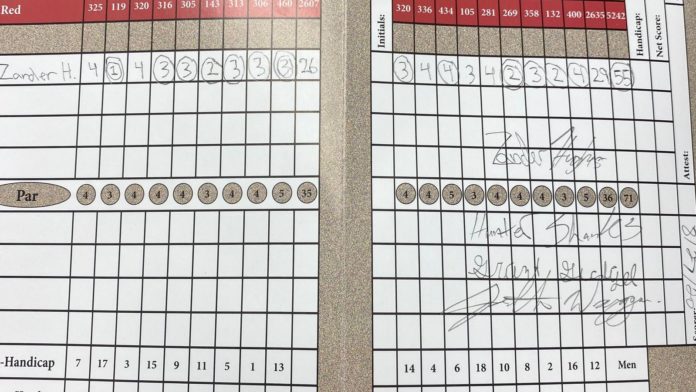 Alexander Hughes agreed to help a junior golfer prepare for an event at the weekend and they were joined by “two random guys” at the South Lakes Golf Club in Jenks, a suburb of Tulsa, and he enjoyed the round of a lifetime which earned him a place in the Guinness World Records.

The record lowest score was previously set by Australian Rhein Gibson, who was also in Oklahoma when he fired a 55 at Rover Oaks eight years ago while still a college player.

Hughes opened with par before setting the tone for his historic round with a hole-in-one at the 155-yard second, and after another par at the third he made four straight birdies before completing an outward 26 with an eagle at the ninth.

“That was about a 20-, 25-footer that rolled in for eagle,” Hughes told amateurgolf.com. “From there I was just like, ‘Alright, I guess keep going lower, keep doing the same thing’. I just kept the ball rolling.”

Hughes then birdied 10 and 12 either side of a lucky break at the 11th, where his drive was inches from disappearing out of bounds, and he holed from 20 feet to salvage a par.

He had a chip on the last hole for the world record, 54 (-17) and barely missed it. pic.twitter.com/LKt1tOJeB0

He nailed a long-range putt for an eagle-two at the 15th and birdied 16 and 17 before drilling his second close to the green at the par-five last, and his chip for a 54 was agonisingly close to dropping for this third eagle of a sensational round.

“Golf is such a mental game – you fight yourself all the time thinking if you can do it or if you can’t do it. Pretty much what this does is it’s just a positive boost that I can do it.

“It’s remarkable to be on such a short list of people who have shot in the mid- to upper-50s. It’s incredible. I’m just blessed to be able to shoot a score like that and be a part of history in some sort of way. It’s very humbling.”