Home Culture What Chadwick Boseman taught us about humanity — and how we can... 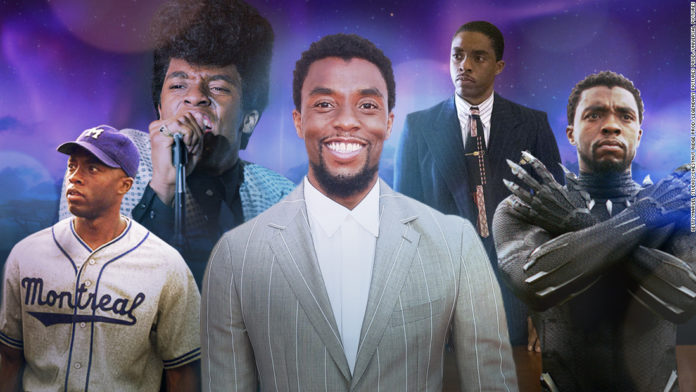 This column from CNN Senior Entertainment Writer Lisa Respers France will become a weekly newsletter later this summer. Tell us what you’d like to see more of in the newsletter at entertainment.newsletter@cnn.com.

We need to only look to the outpouring of grief over his untimely death to know that the “Black Panther” star was influential beyond the screen.
Portraying T’Challa, one of the world’s most beloved Black superheroes, Boseman helped break box office records. But he also came to embody something that people are just now starting to wrap their minds and hearts around in the aftermath of his death.
As I expected, there was some pushback on social media against a piece I wrote about what Boseman meant to the Black community — an “all Marvel fan lives matter” reaction, if you will.
And while I was in no way trying to negate the universality of admiration for the actor, there can be no denying the symbolism and importance of Boseman and “Black Panther” to African Americans in particular.
The complaints did get me thinking of what the loss of Boseman means to the world more broadly, and there are indeed several lessons we can take from his life to honor his legacy.
Perseverance: There was shock all around to discover that Boseman privately battled colon cancer for four years.
He played T’Challa/Black Panther in more than one Marvel film during his illness, and now knowing that he was sick, it’s almost incomprehensible when you look at the physicality of that role alone — and yet he also starred in other films in that time frame.
Marvel shot 2018’s “Avengers: Infinity War” and 2019’s “Avengers: Endgame” back to back soon after filming for “Black Panther” wrapped.
Boseman’s personal trainer, Addison Henderson, told Men’s Journal in 2018 that his client spent a year in constant training for the films.
“We rarely stopped moving during our sessions,” Henderson said of Boseman, who had a background in martial arts. “We trained like we were going into the fight of our lives.”
Humility: Boseman kept his diagnosis largely private, focusing on work and shining a light on others.
He visited young cancer patients in the hospital, even as he battled his own disease.
Boseman in 2018 broke down during an interview he and some of his fellow cast members did for SiriusXM as he told the story of two little boys who were terminally ill and whose parents told him they were trying to hold on for the release of “Black Panther.”
The actor got emotional talking about the boys, who had passed away, and the importance of the film to the Black community because of the representation.
“It means a lot,” he said through his tears.
“Black Panther” director Ryan Coogler penned a beautiful tribute to his star and said even he was unaware that Boseman was ill.
“Because he was a caretaker, a leader, and a man of faith, dignity and pride, he shielded his collaborators from his suffering,” Coogler wrote. “He lived a beautiful life. And he made great art.”
Passion: Boseman played myriad historical figures including Jackie Robinson, James Brown, and Thurgood Marshall, and he gave his all to each and every role.
None more so than his “Black Panther” role, the weight of which he knew would be heavy given what it would mean to fans.
The actor advocated for T’Challa to speak with an African accent in “Black Panther,” Coogler wrote, and Boseman explained to Trevor Noah (who is South African) in an interview promoting the film why this move was so important.
“I knew that an African accent could carry all of that passion in the English language just as well as a British one could if not better,” Boseman said.
Love: It’s a word that has come up frequently from those who knew the actor best.
Spike Lee, his director in the Netflix film “Da 5 Bloods” released in June, remembered Boseman on Instagram with a photo captioned “God Is Love. Love Is Chadwick.”
Boseman clearly loved his art, those closest to him and his fans.
Watching him surprise some of those fans on an episode of “The Tonight Show with Jimmy Fallon” from two years ago feels both devastating and healing.
Because Boseman got to hear firsthand what his work meant to people, you could see what that meant to him.
Love is why we grieve so intensely for a star who burned for such a short period of time, but was the brightest.
In paying tribute on Instagram, Angela Bassett, who played his mother in “Black Panther,” recalled receiving an honorary degree from Howard University in Washington, DC, years ago and Boseman, then a student, was assigned to escort her on campus.
Everything about Boseman seems to come back to him being of service — to Bassett and to us — via his talent and his grace. So as she wrote in her tribute, I choose to believe “thou aren’t not dead but flown afar,” Mr. Boseman. We appreciate all you left us with before you took that trip.

Three things to watch:
One of the year’s most anticipated films is getting released, though not in the way that had been planned.
The live action version of “Mulan” isn’t coming to theaters, but it does start streaming on Disney + Friday — for an additional fee.
Yifei Liu stars as a fearless young woman who decides to disguise herself as a man to fight in place of her father.
‘Chef’s Table: BBQ’
Weekends were made for barbecue.
Netflix’s critically acclaimed and Emmy-nominated series is back for a new season, this time “delving into the smoky, juicy world of barbecue.”
Featured chefs and pitmasters include Tootsie Tomanetz, an 85-year-old grandmother who still shovels the coals at her Texas restaurant; Lennox Hastie, an Australian chef who sources all of his ingredients from the Outback; Rodney Scott of South Carolina, who is known for his whole hog barbecue; and Rosalia Chay Chuc, a traditional Mayan chef who serves cochinita pibil out of her home in Mexico.
You may want to keep something handy to snack on for this one.
‘Twilight’
Want some romance with a side of paranormal?
You can revisit the great love story that was Edward and Bella in the “Twilight” franchise, now streaming on Hulu.
Remember when the stars, Robert Pattinson and Kristen Stewart, were a couple in real life and we thought they would last for eternity?
Well, we clearly all got a little too carried away with their characters.
‘Sex and the City: The Movie’
Who isn’t missing New York City the way it used to be?
Let Carrie Bradshaw and her friends remind you of the time when drinking Cosmos while wearing Manolo Blahniks in the Big Apple may have been a fantasy, but at least felt a teeny bit attainable.
The film is now streaming on Amazon Prime.
Two things to listen to:
Even Kamala Harris showed up when Brandy and Monica “battled.”
According to CNN’s Amir Vera, 1.2 million people tuned into Instagram Monday to watch the pair go through their combined catalog of hits from the 1990s.
The two singers famously dueled in their hit 1998 duet, “The Boy Is Mine.”
Brandy and Monica were the latest participants in the Verzuz battle series, which bring artists together to compare their music to the delight of their fans.
If you missed the Monica and Brandy event, both Tidal and Spotify have playlists of the songs featured.
Check out any of the podcasts in this roundup by Christi Scott that deal with race, identity and diversity.
My personal favorite is “Yo, Is This Racist?”
Based on Andrew Ti’s popular blog of the same name, Ti and his co-host, Tawny Newsome, tackle listener-submitted questions about racism.
The duo attacks some not-so-funny issues with humor — and yes, if you have to ask, it’s usually racist.
One thing to talk about:
“Never Been Kissed” almost made it into my three things to watch this week, but then I paused.
While at first glance the film starring Drew Barrymore as a writer who goes undercover as a student in high school is one of my faves when it comes to nostalgia and romance, I feel like lately I’ve been watching and reading things through a more contemporary lens.
So while back in the day her character falling for dreamy teacher Michael Vartan had me all googly eyed, now it’s as if a neon #MeToo sign starts blinking over some scenes.
There is so much now that can feel problematic, and the debate over what should and shouldn’t be canceled can feel exhausting.
But I’m glad the conversations are happening and I hope that someday there can be more elevated discussion about putting things in context and using such moments for growth.

Will you watch “Never Been Kissed” when it starts streaming Friday on Disney+? Email me or hit me up on social and let’s discuss.

Something to sip on
Can social media just let Adele live?
I know quite a few Jamaicans. (I happen to be married to one.)
And I can assure you many of them were not nearly as bothered by Adele wearing a Jamaican flag bikini top and Bantu knots hairstyle as the internet appeared to be.
Yes, appropriation is an issue (looking at you, Kardashian/Jenners). But in this case, it appears like Adele was actually celebrating the culture and a Caribbean festival that would have happen were it not for the pandemic.
So while not everyone may have loved her fashion choice, the thing that people seem most upset about may not actually be a thing after all.
Pop back here next Thursday for all the latest happenings that matter in Hollywood.