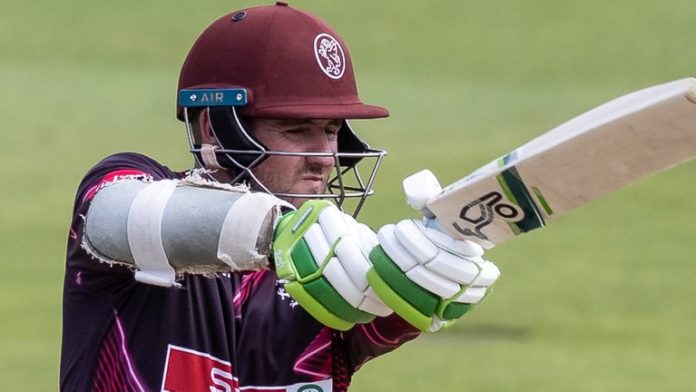 Somerset achieved their highest T20 score away from their Taunton headquarters as they defeated bottom side Worcestershire by 16 runs in a Vitality Blast encounter at Edgbaston.

Steven Davies continued his liking for batting on the ground as he top-scored with 60 in a total of 229-8 after being put into bat.

But they were aided by some poor bowling by the Rapids, who conceded 14 wides and three no-balls and saw skipper Ed Barnard removed from the attack for bowling successive high full tosses.

The Rapids lost early wickets but Jake Libby – with a T20 best of 75 not out – and some late hitting by Daryl Mitchell, who had earlier become Worcestershire’s leading wicket-taker in T20 cricket, lifted the final total to a respectable 213-7, with Josh Davey returning 4-41.

Somerset’s second win has kept them in contention to qualify from the Central Group, but the Rapids, winners in 2018 and runners-up last September, are without a victory after four matches. Worcs vs Somerset scorecard

England batsman Zak Crawley made an impressive 67 as Kent held their nerve to beat Sussex by one run in a thriller at Hove.

The Sharks, who were chasing 196 after Crawley’s knock, seemed to be on course for victory with two needed off as many balls but Ravi Bopara gloved a short ball from Fred Klaassen to the keeper and Ollie Robinson was run out looking for a single to mid-on that would have tied the game.

It was a spirited fightback by Kent, who looked beaten when Sussex required nine runs off seven balls with David Wiese going well on 38.

But the South African holed out to long-off from the last ball of the penultimate over and although Klaassen began the final over with two wides he gave little away thereafter, calmly collecting Daniel Bell-Drummond’s throw and beating Robinson’s desperate dive to make his ground and spark jubilant celebrations.

Crawley top-scored in Kent’s 195-5 after they had been put in, hitting six fours and two sixes in his 49-ball knock. Sussex vs Kent scorecard

Nathan Buck’s productive season continued as his 4-29 led Northamptonshire to a fourth-straight Blast victory – a four-wicket win over Glamorgan at Edgbaston.

His spell helped hold Glamorgan to 160-7, a total that never seemed enough, but Northamptonshire could not find a significant innings to kill the chase and only won with four balls to spare thanks to Alex Wakely’s unbeaten 36 from 29 balls.

Having been cruising, Northamptonshire needed 19 from the final two overs before Graeme White struck Graham Wagg over point and then cover for four. Wakely then powered Marchant De Lange down the ground for four first ball of the final over.

Saif Zaib is on 🔥🔥🔥 – this one might be even better from the @NorthantsCCC man!

It kept Northamptonshire in pole position for a quarter-final with the best record in the competition, while Glamorgan were already staring at another disappointing campaign. Northants vs Glamorgan scorecard

County cricket’s first live attendance of the Covid-shortened season saw Hashim Amla and Will Jacks steer Surrey to a nine-wicket victory against Hampshire in a South Group match affected by rain.

It was Surrey’s first win of the summer, following four Bob Willis Trophy losses plus a tie, a no result and a defeat from their opening three T20 fixtures, and they were always in charge once Gareth Batty had won the toss and opted to field in front of 2,500 members at the Kia Oval.

Chasing 80 on Duckworth Lewis Stern, after Hampshire’s innings was delayed and then disrupted by the weather, Amla and Jacks put on 64 in 8.2 overs to ensure there would be no alarms as they chased down a total that always looked inadequate.

It took until the fourth ball of the final over, though, for Jacks to finish off Hampshire when, after six runs were still required from the last six balls, bowled by Ryan Stevenson, he top-edged a pull for his fifth four to reach 45 not out from 31 deliveries. Surrey vs Hampshire scorecard

Teenager Luke Hollman starred with both bat and ball as Middlesex clinched their first victory in the Blast, overcoming defending champions Essex by 11 runs at Lord’s.

The 19-year-old leg-spinner, making only his second senior appearance, struck a valuable unbeaten 25 to stem a Middlesex batting collapse and lift them to 167-7 after Stephen Eskinazi and Max Holden had posted an opening stand of 97.

Hollman then returned figures of 2-26 to restrict Essex – who have failed to win any of their first four games in this season’s Blast – to 156-8 in reply.

Middlesex captain Steven Finn backed up the youngster with 3-18, including the key wicket of Ryan Ten Doeschate, who had threatened to guide the Eagles home with his knock of 32 from 25 balls. Middlesex vs Essex scorecard