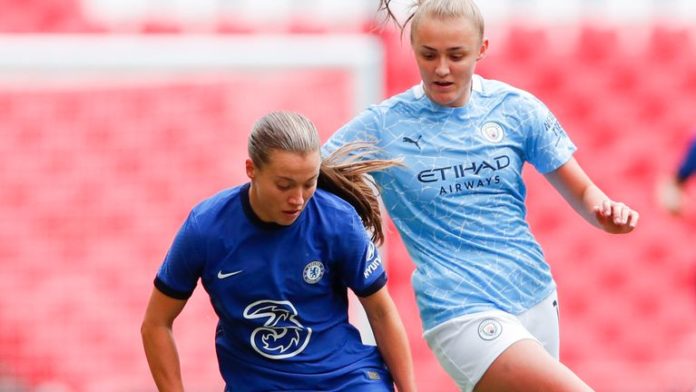 The 2020/21 Women’s Super League season starts this weekend, with old rivalries ready to be resumed and a series of high-profile new arrivals out to make their mark.

Chelsea are the reigning champions after winning the curtailed 2019-20 campaign on a points-per-game basis, and served a statement of intent by beating Manchester City in the Community Shield.

Who could stop them? Which sides could spring a surprise? And, after a summer transfer spree that has brought an influx of North America-based players to the division – plus a player from Europe for a British record fee – who could make the difference this term?

No team has retained the Women’s Super League since Liverpool in 2014 but Chelsea set the tone with their 2-0 Wembley victory against closest rivals Manchester City – and then unveiled Danish goal machine Pernille Harder.

Emma Hayes’ side already have last season’s player of the year, Bethany England, and star forward Sam Kerr – out to properly fire after a truncated first season – in their ranks, while the energetic Fran Kirby is back to fitness after illness.

“We didn’t get the start we wanted in the first few fixtures [last season], so we want to put that right and make sure we are ready to go from the beginning,” Kirby has said. “Training has been tough and competitive and we’ve got real strength in depth in this team.”

Man City were top of the table when the last WSL fixture was played, only for the points-per-game calculation to bump them off the summit. Boss Gareth Taylor, taking charge for his first full season, has added his own A-listers to an already impressive squad: World Cup winning-midfielders Rose Lavelle and Sam Mewis, as well as leading young English forward Chloe Kelly.

Last season’s disappointment burns, if Keira Walsh’s convictions are anything to go by. “We’re going to push on even harder this year,” she told City’s website. “Our targets for a good season would be winning every trophy – the expectation for this team is no less than that.

“We wanted to bring in world class players but it’s going to be about the squad – we might have 50 games. It’s the squad that is going to help us to win games and hopefully bring trophies back to Manchester.”

One big signing could yet land in Manchester soon: Lucy Bronze looks set to rejoin City after winning yet another Champions league title with Lyon.

Arsenal finished third behind Chelsea and City last term but with both flexing financial muscle, head coach Joe Montemurro is expecting this season’s Women’s Super League to be the toughest ever.

“I think the growth (of the WSL) is looking very, very healthy from here on but it is going to be a difficult season,” he said. “I’m pretty clear with the direction and what I want to recruit for what we need. We try to play our style of football, we try to make sure we represent the club in the best way possible.”

Steph Catley and Noelle Maritz have bolstered the Gunners’ defence, while Vivenne Miedema – joint-top scorer last term and top of the charts the year before – remains one of the world’s top attacking talents; can Beth Mead – handed the No 9 shirt – stay fit to help unlock defences?

Manchester United finished an impressive fourth in their first WSL season and while the title might for now be a tall order, Casey Stoney – who has added the experience of England’s Lucy Staniforth – will be keen to close what was a 13-point gap to third-placed Arsenal.

Stoney has admitted there is a “gap in budget” but has warned rivals her aim is to make United “one of the best in Europe. “I’m ambitious, I’ve got ambitious players,” she told Sky Sports. “I know what we’re capable of, we know we can push ourselves into that top three. That’s our target, it has to be about improving year on year. Everyone would love to get to a cup final as well.”

Everton finished sixth in the table last season but have strengthened at both ends of the pitch and have lofty ambitions. The club announced extra support and investment for the women’s team back in March, with chief executive Denise Barrett-Baxendale saying the Merseyside club wanted their women’s side to challenge for trophies.

Reading lost to all four sides who finished above them last season but have strengthened across the park. Former Arsenal forward Danielle Carter is a proven goalscorer looking to get back in the groove after injury, while Jess Fishlock returns to add stardust to midfield and Deanna Cooper bolsters defence.

Could Aston Villa spring a surprise? Gemma Davies’ side went unbeaten as they romped to the Championship title last season. Top scorer Mel Johnson has left for Sheffield United but Portugal striker Diana Silva is a statement signing to fill the gap, while Anita Asante brings pedigree and experience.

The new signings to look out for

‘Her decision-making in the final third and the timing of her runs into the box is exceptional.’

Emma Hayes reveals what @PernilleMHarder will bring to the Blues! 👌#PlayHarder

Pernille Harder: Harder is a blockbuster signing for the WSL as well as Chelsea, arriving from Wolfsburg on a three-year deal for a British record fee in excess of £250,000. The striker, who can also be deployed as as attacking midfielder, won the domestic double in each of her four seasons in Germany and netted 103 goals in 113 games.

“She can play for any team in the world but she chose us,” said Blues boss Emma Hayes. “She chose the players, the staff, the environment, the playing style. You can’t get a bigger compliment than that from one of the best players in the world.” Harder, UEFA’s player of the year in 2018, said: “The English league, it’s so exciting at the moment and I’m really looking forward to it.”

Rose Lavelle: The USA’s World Cup-winning midfielder will spend a year at Manchester City before returning to new NWSL club OL Reign and can’t wait to get started. “The idea of playing in the Champions League and competing for so many different titles was really fun; I’m up for it and I think it’ll be a good time,” she said. “Man City is one of the best clubs in the world, both for the men and women’s side; they have so many resources for both teams so that was awesome.

Lavelle was named the third best player at the 2019 World Cup, behind compatriot Megan Rapinoe and England’s Lucy Bronze. “I have big admiration for Lavelle,” Chelsea striker Beth England told Sky Sports. “I watched her in the World Cup and thought she was unbelievable. It’s exciting for the league; it’s going to be nice to see how she plays and adapts.”

Sam Mewis: Another star US midfielder, Mewis, has signed a short-term deal with City after moving from NWSL North Carolina Courage. The 6-footer with 67 caps prides herself on her dribbling ability and aerial threat. “I’m really excited to see how I fit in with the group,” she told City’s website. “Maybe I’ll bring a bit of a unique style being American and having played a really high-pressure, attacking-oriented style in the last few years.”

Jess Fishlock: Wales’ most-capped player has joined Reading on loan from OL Reign while the NWSL is on hiatus. Fishlock spent more than a year sidelined by a serious knee injury but Royals manager Kelly Chambers has described her as a “world-class player with incredible experience”. Former Arsenal and England forward Lianne Sanderson told The Women’s Football Show on Sky Sports: “Mewis and Lavelle are the top two everybody is looking out for, but Fishlock coming back to play in England is also a big plus.”

Steph Cately: The Australia full-back with 82 caps joins Arsenal from Melbourne City and brings extensive experience as well as an attack-minded approach. “We’re privileged to have Steph at the club,” said Arsenal boss Joe Montemurro. “She suits our fluidity and she’s very good in a positional sense, but more importantly she’s very effective going forwards. “She’s a fantastic full-back; if she can stay injury-free, she’s going to be fantastic for Arsenal and for the league,” Sanderson told The Women’s Football Show.

Valerie Gauvin: The France forward has swapped Montpellier for Everton, with Toffees boss Willie Kirk hailing the 24-year-old as a “real coup and a sign of our ambition”. Gauvin, who has signed a three-year-deal on Merseyside, scored 14 goals in 16 league appearances during curtailed the 2019-20 season.