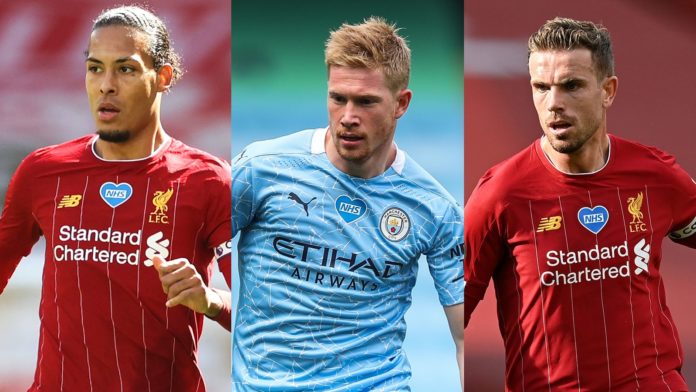 Premier League winners Liverpool have had four players nominated for the PFA Player of the Year award, with Trent Alexander-Arnold also included on the shortlist in the young player category.

They are joined on the shortlist by Manchester City duo Kevin De Bruyne and Raheem Sterling.

See Liverpool back in action exclusively live on LFCTV. Find out more here

The Liverpool quartet have been rewarded for the roles they played in the club’s first title success in 30 years, finishing 18 points clear of second-placed City.

England international Alexander-Arnold, 21, and Van Dijk played in all 38 league games, while Henderson captained the side impressively and Mane scored 22 goals in all competitions.

De Bruyne enhanced his reputation with a series of stunning individual displays for City, while England star Sterling scored 35 goals for club and country.

Alexander-Arnold is joined on the Young Player of the Year list – nominees had to be 21 or under on July 1, 2019 – by Manchester United pair Marcus Rashford and Mason Greenwood, Chelsea striker Tammy Abraham and club-mate Mason Mount, and Arsenal teenager Bukayo Saka.

Chelsea players dominate the candidates for the Women’s Player of the Year category with Beth England, Sophie Ingle, Guro Reiten and Ji So-Yun all included.

The Blues narrowly won the Women’s Super League title ahead of Manchester City on a points-per-game basis when last season was called to a halt because of the coronavirus pandemic.

Striker England scored 21 goals in all competitions playing ahead of midfielders Ingle, Reiten and Ji as the Blues claimed the title and the Continental League Cup.

The winners will be announced on Tuesday.