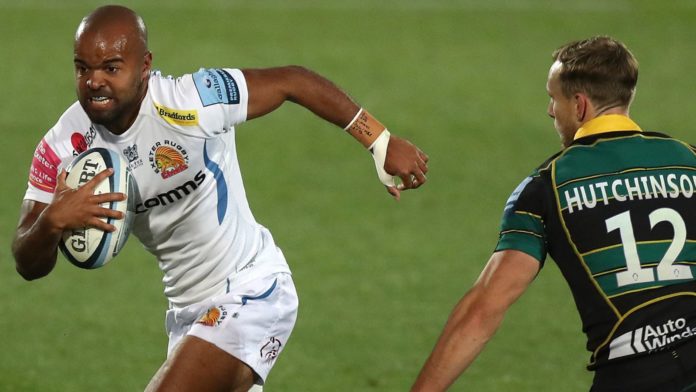 Exeter celebrated a decade in the Gallagher Premiership by ending Northampton’s semi-final ambitions with a 22-19 victory at Franklin’s Gardens.

Ten years ago to the day the Chiefs marked their debut in the top flight with a win against Gloucester and they have since emerged as the competition’s dominant force in the form of a 15-point lead at the summit of the table.

Remarkably, the result was secured with a second-string side that contained Gareth Steenson and Phil Dollman, the only survivors from the XV that toppled Gloucester in 2010.

It took a 72nd-minute try from Tom O’Flaherty to see off Northampton in an entertaining match behind closed doors as Exeter claimed a sixth successive win.

Saints boss Chris Boyd named his strongest possible XV for a game he said must be won to stay in semi-final contention but it failed to prevent the club from slumping to their worst sequence of home defeats in the Premiership.

There were warning signs for Northampton right from the start as Dollman danced through their parting midfield with ease to signpost the havoc to come.

O’Flaherty escaped down the right wing in a move that started deep inside Chiefs territory and ended when openside Sean Lonsdale was sent into a gap with his turn of pace doing the rest.

And Exeter were on the rampage again shortly after as they cleverly exploited the blindside once Dollman had again made inroads and this time it was Jannes Kirsten who cantered over.

Northampton responded with a sustained assault that eventually saw David Ribbans force his way over at the bottom of a pile of bodies under the posts and two minutes before half-time they were over again.

Dan Biggar had taken a bang to his right arm and despite his obvious discomfort, he sent hooker James Fish through a gap and a pass later scrum-half Henry Taylor had touched down.

Biggar missed a simple conversion that meant Exeter led 14-12 ahead at half-time but Saints made a blistering start to the second half when Rory Hutchinson raced downfield where Biggar arrived to continue the move.

It looked as though Biggar would finish himself but he was hauled down and on the next phase Ribbans smashed through four tackles to claim his second.

But Exeter dominated the next half-hour, enjoying reams of possession, and eventually the pressure told when a lineout created the chance for O’Flaherty to sidestep across for the decisive try.